It’s Been One Of Those Mornings! 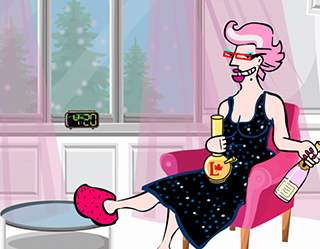 Whew, Pumpkins! That was some dream I had. It’s almost too horrific to share. But here goes...

I dreamt the whole world was caught in the clutches of an evil - yet stable - genius who’d unleashed some kind of Co-video virus on humanity which forced us to watch endless reruns of incoherent ramblings about large hands and mushrooms disguised as penises. (It’s a dream - I don’t make this stuff up.)

Anyhoo, what happened was people started getting sick from watching this stuff night and day, but ol’ Mega Mind blamed it all on the Chinese because it actually started out as a fusty Mexican beer.

Gawd, can dreams ever be nutty, eh?

It was probably the last of the frozen bigos I ate last night. That’ll teach me!

Now it’s on to canned goods. I think there’s a few tins of beluga and a case of Belvedere in the basement. That’ll hold me until Ricko gets back with my truffle risotto. Don’t know what’s keeping him. He did sound a bit breathy last time we spoke, but with Ricko, that‘s probably just vigorous stirrings. He does get passionate about a bulbous Italian tuber.

Wait a minute. Why does the TV keep flashing warnings not to touch my face? Is the worldwide emergency stockpile of Botox in danger? Agh!

Gosh, I’m just a pile of nerves this morning. Feel like that cotton headed ninny muggins of a dink head who runs Open Jaw.

I’ll just fire up the bong and put the whole nasty business behind me.
What’s the worst that can happen now? A few innocent April fool’s jokes?