Opinion: Ensemble Celebrates 50 Years On The Shoulders Of Giants 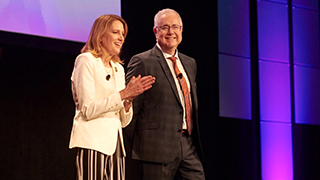 To mark its 50 year anniversary, The Ensemble Travel Group is running with the very clever line “Fast Forward on the Shoulders of Giants.” Smart.

For those of you too young to remember Giants, it was the consortium formed in 1968 which in 2004 became the bilingual “Ensemble.”

The celebratory 2018 Ensemble Travel Group International Conference is taking place in the Bahamas at the Atlantishy Grand Hyatt Baha Mar (minus the Poseiden’esque turrets).

Co-Presidents Lindsay Pearlman and Libbie Rice launched the conference with their usual Burns & Allen-style vaudeville routine. Over the years they’ve worked it into a smooth delivery, fully cognizant of the fact the schtick borders on campy. But when you own it, it works.

Throughout the speech, the audience of 900 members, suppliers and guests were shown pre-taped period routines of Giants/Ensemble retail scenes over the decades with Lindsay playing the boss and Libbie as co-worker, straddling the corner of the desk in short dresses. In these times, flipping the roles might have been a wiser choice.

But back on stage, the duo bounce lines off each other in easy harmony. The message: “We’ve come a long way baby, and we’re going even further.”

The last three financial years were the best on record for the bi-national organization. And, according to Rice, 2018 is tracking to be an even better year than 2017.

“If you’re in this room, think about how far you’ve come in your professional journey. More than likely you didn’t do it in major leaps. You did it in small steps just like GIANTS and Ensemble.”

Fast forward to 2018 and a strong future outlook.

There is no doubt congratulations are in order. Ensemble is a well-run organization which does an excellent job of supporting its members. They bring heart and soul to their roles.

To this industry observer, having watched the well-wishing videos from various male leaders of key suppliers at the beginning of the show, the fast forward button is stuck on pause when it comes to women in leadership. True progress will happen when there is greater gender equity in travel -- when women bring their unique abilities to the boardroom.

Congratulations Ensemble. Next year let’s have Lindsay in the short dress.