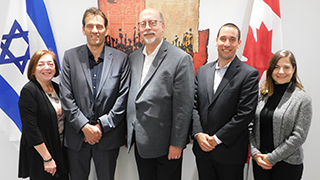 The record 3.6 million tourist arrivals in Israel in 2017 was a 25% jump from the year before. And with this year seeing a 15% increase to date on top of those heady numbers, the country expects to top 4 million visitors by mid-December.

There’s no end in sight to the “wonderful momentum” described by Amir Halevi, Director General of the Israeli Ministry of Tourism during a visit to Canada this week. He says the “next headache” is building more accommodations to handle the crowds, but acknowledged that it’s not a bad problem to have, especially considering some of the obstacles the nation has faced in building its tourism numbers.

A period of relative peace since troubles in Gaza in 2014 has led to a challenging but ultimately successful rebound for Israel’s tourism industry, but major shifts in tourism strategy are also driving growth.

“In the past we have always placed a strong emphasis on the Holy Land and faith-based tourism,” says Eyal Carlin, Acting Director of the Oversea Department Marketing Administration.

“But we have made a brand shift from Israel overall to the urban experiences of Tel Aviv and Jerusalem, and we have diversified the product into sports tourism and other areas. 2019 is looking phenomenal and we already have fantastic bookings for 2020,” Carlin said.

Israel is investing significantly in tourism, with a major increase in marketing spend and significant incentives for airlines to add Israel routes. Carlin says the moves have had a “tremendous impact,” including attracting Air Transat to the destination and encouraging the addition of Air Canada flights from Montreal.

“And we’re hoping that one day WestJet will fly from the west coast to Israel,” Carlin added.

Safety has long been a concern for Israeli visitors, thanks to the tumultuous neighbourhood the small nation inhabits. But as terror attacks have occurred all over the world in recent years, the focus has shifted, Halevi says.

“There’s a different mood all over the world. We don’t know where the next attack will be, but people have decided to keep moving, keep travelling.”

The Israeli officials discussed the many developments in the country’s tourism product, including marathons and mountain bike races, ‘glamping’ in the Negev desert, Tel Aviv’s hugely popular annual Pride celebrations and more. With these kinds of additions to the product, this is not your parent’s Israel tourism.

“There’s something for everybody in Israel,” said Carlin. “And the curiosity factor is huge. But Israel is a complicated destination, and that’s why travel agents are very important to us. We truly value that partnership.”

For Israeli tourism officials in Canada, 2018 has been a magical year, with each month setting 20-year records. Last year more than 85,000 Canadians made the trip and numbers are up year-to-date. Next year Israel hopes to welcome 100,000 Canadians for the first time.