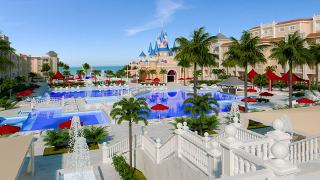 Bahia Principe, the all-inclusive resort brand with properties in Spain, Mexico and the Caribbean, has officially opened its 25th hotel, a five-star Fantasia-brand resort on the island of Tenerife, Spain.

The property is a sprawling complex that features eight buildings spread throughout more than 480,000 square-feet of space. There are 372 rooms, seven swimming pools, five restaurants, six bars, a water park, the brand’s signature Bahia Spa, and wellness centre.

Bahia Principe says the most striking structures are the property’s white castle and replica “Dragon Tree,” known as the Drago Milenario de Icod de los Vinos, a dracaena tree that is an icon of Tenerife – both which are located by the pool area in the centre of the hotel and will feature spectacular light shows at night.

“On one hand, it consolidates and reaffirms our commitment to Spain, where seven of our 25 hotels are located. On the other hand, it allows us to present a new brand to the market: Fantasia, which we believe will put us at the forefront of entertainment innovation in the all-inclusive segment for families worldwide.”