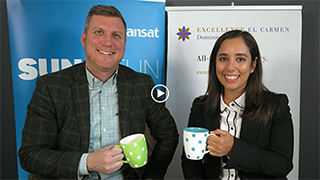 Natalia Boschi with Transat's Dan Prior.

Natalia Boschi, well known to the Canadian industry in her role as Sales & Marketing Manager for Excellence Group, has announced she is pursuing a new professional project outside of the company.

As a result, Corporate Director of Sales David Torres has announced the appointment of Ricardo  Portillo to the Excellence Group family as Sales and Marketing Manager, replacing Boschi on her Partner Marketing and Business Development duties.

Torres described Boschi as “a key asset to Excellence and one of our team´s most valuable players for the last five years.”

“We want to publicly thank her for her many years of hard work and phenomenal achievements towards our commercial partnerships and organizational vision,” Torres added.

Portillo can be reached at rportillo@grupoexcellence.com.