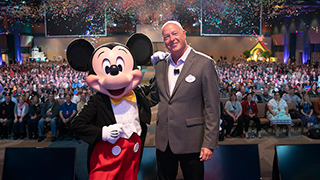 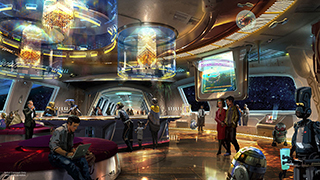 Chapek began by revealing the names and the first-ever look inside the two signature attractions set for Star Wars: Galaxy’s Edgewhen it opens at Disneyland Resort next summer and at Walt Disney World Resort in fall 2019.

Fleshing out the experience at Galaxy’s Edge, Chapek announced that guests will be able take the controls in one of three critical roles aboard Millennium Falcon: Smugglers Run. On Star Wars: Rise of the Resistance, guests can join an epic battle between the First Order and the Resistance – including a face-off with Kylo Ren. These two new experiences, paired with the land’s interactive components and optional integration with the Play Disney Parks app, will invite guests to become galactic travellers and live their own Star Wars stories.

Chapek provided a sneak peek at the Star Wars resort coming to Walt Disney World Resort. This multi-day, fully immersive adventure promises to take guests aboard a luxury starship with all the features expected of a first-class hotel, including dining, recreation, and accommodations, all authentic to the Star Wars universe.

In celebration of 90 years of Mickey Mouse, Chapek revealed how Disney is coming up with new ways to celebrate the beloved mouse. Imagineers have created Mickey & Minnie’s Runaway Railway, using leading-edge technology to transform a two-dimensional cartoon into a real-world experience. The first-ever ride-through attraction themed to Mickey Mouse – set to open in fall 2019 – will feature a new original story and theme song as it takes guests on a journey inside the wacky and unpredictable world of Disney Channel’s Emmy Award-winning “Mickey Mouse” cartoon shorts.

Chapek also shared more about the multi-year transformation of Epcot, including new spectaculars designed to honor the park’s original vision.

During his presentation, Chapek offered more details about Reflections, a deluxe, nature-inspired resort coming to Orlando that will feature more than 900 hotel rooms and proposed Disney Vacation Club villas.

He also gave a sneak peek at Disney’s Riviera Resort, inspired by the European grandeur Walt Disney experienced in his travels along the Mediterranean coastline. Projected to open in fall 2019, this proposed resort will be the 15th Disney Vacation Club property.

“We are currently in the midst of one of the most extraordinary periods of expansion in our history,” Chapek said. “We are always pushing the boundaries of what’s possible as we deliver world-class experiences and attractions, new hotels and entertainment, itineraries and destinations for our guests.”