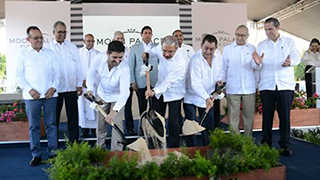 Moon Palace Punta Cana represents an investment of more than US$600 million and is part of a larger expansion plan for Palace Resorts, which currently owns and operates 10 properties throughout Mexico and Jamaica.

“Expanding the Moon Palace brand is part of our company’s long term growth strategy. The brand’s expansion comes after the wildly successful resort, Moon Palace Cancun, the newly opened The Grand at Moon Palace Cancun and Moon Palace Jamaica,” said Gibrán Chapur, executive vice president for Palace Resorts. “The development in the Dominican Republic was a natural fit for the expansion of the brand, given its popularity in the Caribbean.”

The new Moon Palace Punta Cana will feature 2,149 rooms, 70% of which will offer ocean views with the balance facing a 18-hole golf course designed by Greg Norman. There will be 21 restaurants and seven bars, along with various sports amenities, swimming pools, a spa, beach club and convention centre.

During development, the area’s natural resources will be preserved, including the mangroves, and will form part of the 4.5 million sq.m. of protected land owned by Palace Resorts. The project’s sustainability effects include the use of renewable energy and water treatment systems that will permit residual use for irrigation purposes. The new resort will also boost the area’s supply chain in the areas of food production and fishing.

“The country offers lush, tropical and paradisiacal miles of coastline, magnificent resorts and hotels, and a variety of sports, recreation and entertainment options,” said Chapur.

“From delicious gastronomy to a variety of ecotourism adventures in the country’s national parks, mountain ranges, rivers and beaches, Dominican Republic is a destination like no other. We’re here to add to and contribute to this country’s goal of continually increasing the number of visitors that can generate a better income for its inhabitants.”