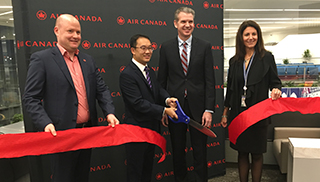 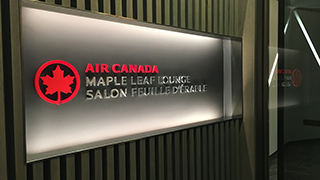 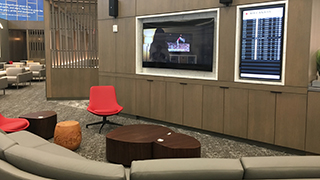 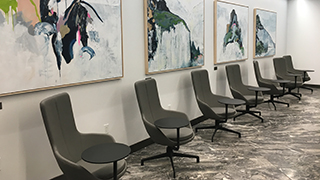 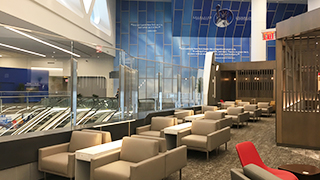 At an event complete with Molson Canadian on tap and works by Canadian artists hanging on the walls, Air Canada celebrated the opening of its newest Maple Leaf Lounge at New York’s LaGuardia Airport.

Officially opened to the public on 4DEC, the lounge is located in LGA’s new Terminal B, which itself just opened on 1DEC. Featuring a light-filled concourse with 13 new shops and restaurants, the terminal is part of a US$5.1 billion redevelopment project, and is a significant step up for the airport and travellers alike. AC’s new lounge, which overlooks the concourse, offers the added advantage of being located past security and within close proximity to the Air Canada gates.

“This is a hugely important day for Air Canada,” said Mats Winter, director of airport and in-flight product for Air Canada, when he sat down with Open Jaw at the media preview event held on 3DEC. “The New York City market obviously is very important to us as an organization – we operate a lot of capacity, a lot of frequency from here up to Montreal and Toronto – and it’s a very premium, business travel focused market, which is why it’s so important to us to have our own lounge here, and we’re really proud to be the first lounge in this new concourse.”

The new, contemporary space has been outfitted with all of the amenities and services you’d expect from a premium lounge – all day buffet, continental breakfast in the morning, complimentary bar, digital access to 7,000 magazines and newspapers courtesy of Vancouver-based company PressReader and high-speed Wi-Fi. It also celebrates the brand’s Canadian roots by showcasing the various works of Canadian artists, including Johanna Reynolds and Steven Medervine.

Another first for AC at this lounge is the launch of its Premium Agent program in the U.S., a highly successful program for the airline in Canada, where employees are specifically trained to work in both the lounges and priority check-in area.

“This lounge is definitely designed to meet the highest standards and it really fits into our strategy of investing into our product,” continued Winter. “It’s really a journey that we started a few years ago when we opened our new business class check-in concept at Toronto Pearson… we continued that journey this year with the rebranding of our international business class cabin to Signature class and some other key product enhancements; this is all part of that investment and focus in our premium product and at the same time it’s also solidifying our position in the U.S. market. It’s no secret that we are very much interested in growing our connecting traffic through our hubs.”

A project that was two years in the making, the lounge offers more than 7,000 square feet of space and can accommodate 126 customers at any given time, double that of Air Canada’s original lounge at LGA. Air Canada is also the first airline to open a lounge in the new concourse space, with United not slated to open its space until summer 2019.

Given Air Canada’s long history at LaGuardia –  with its YYZ-LGA route starting back in 1941 and YUL-LGA route in 1950 – the lounge is a natural next step in that relationship, while offering all the comforts and conveniences that today’s travellers are sure to appreciate.

Air Canada will open another Maple Leaf Lounge in St. John’s, NF before year’s end, with another slated to open in San Francisco towards the end of 2019.