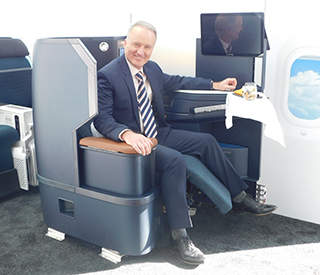 WestJet President Ed Sims tries out the business class seating that will be installed on WestJet's 787 Dreamliner fleet.

When an airline is evolving as quickly as WestJet, a little turbulence should come as no surprise.

That has certainly been the case in 2018, as WS faced unprecedented labour unrest, posted its first money-losing quarter in 13 years and struggled with high fuel prices and ongoing economic weakness in its home market of Alberta.

At its Investor Day yesterday in Toronto, WestJet execs made the case for a 2019 turnaround, with the goal of expanding margins through a combination of improved revenue performance, a continued focus on cost control and a conservative approach to capacity management.

“It’s been a very difficult year, the result of a confluence of many factors,” said Tim Croyle, Vice President and General Manager of WestJet Vacations in a meeting with trade media. But he’s confident the future holds good things for a carrier making the difficult transition from a “one fleet type, one product” airline into a full-service global carrier.

For the full year of 2019, WestJet’s leaders forecast revenue per available seat mile (RASM) will grow 2-4% year over year, driven by still-solid demand and strength in the core WestJet business, the roll-out of branded fares across all routes, higher ancillary revenues at both WestJet and subsidiary Swoop, and the introduction of premium and business cabins on the Boeing 787 Dreamliner.

CASM – that’s cost per available seat mile -- is expected to be flat to up 2.0% year-over-year in 2019, driven by continued investment in the business to support the Boeing 787 Dreamliner and the infrastructure required to deliver on WestJet's strategic plan and capacity increases in Swoop which have a dilutive effect on overall CASM performance.

Capital expenditures in 2019 are expected to be between $1.0 billion and $1.2 billion driven by deposits and acquisition of Boeing 737 MAX and 787 Dreamliner aircraft. WestJet has signed a letter of intent to sell and lease back the first three Boeing 787 Dreamliners to be delivered in the first quarter of 2019; the proceeds from the sale will fund approximately half of 2019 capital expenditures.

Building off of a challenging base year in 2018, WestJet is expecting improved earnings per share performance with a compound annual growth rate (CAGR) of greater than 40% from 2018 to 2022 along with an improving annual return on invested capital that is expected to return to double-digits in 2020 and reach 13% in 2022. WestJet expects heightened capital expenditures of approximately $1.1 billion in 2019, $980 million in 2020 and approximately $1.1 billion in 2021 as the Boeing 787 Dreamliners are inducted into the fleet.

WestJet also took advantage of its Investor Day spotlight to announce an expanded codeshare relationship with Qantas. The airline will place its WS code and flight numbers on Qantas-operated flights between Los Angeles and Sydney, Melbourne and Brisbane.

WestJet operates flights from Vancouver, Calgary, Edmonton and Toronto to Los Angeles. The WS code will be added on Qantas' daily flights between Los Angeles and Sydney, Melbourne and Brisbane and its seasonal service between Vancouver and Sydney.