Airlines Heading For A Decade In The Black In 2019 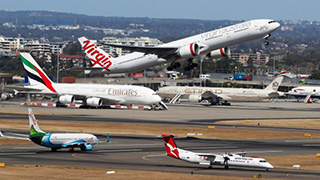 Lower oil prices and solid, albeit slower, economic growth (+3.1%) will extend the run of profits for the global airline industry, says global airline organization IATA, after profitability was squeezed by rising costs in 2018.

IATA is projecting that 2019 will be the tenth year of profit and the fifth consecutive year where airlines deliver a return on capital that exceeds the industry’s cost of capital, creating value for its investors.

The group forecasts global airline industry net profit to be US$35.5 billion in 2019, slightly ahead of the US$32.3 billion expected net profit in 2018 (revised down from US$33.8 billion forecast in June).

Highlights of expected 2019 performance include:

“We had expected that rising costs would weaken profitability in 2019. But the sharp fall in oil prices and solid GDP growth projections have provided a buffer. So we are cautiously optimistic that the run of solid value creation for investors will continue for at least another year. But there are downside risks as the economic and political environments remain volatile,” said Alexandre de Juniac, IATA’s Director General and CEO.

Economic Growth: GDP is forecast to expand by 3.1% in 2019 (marginally below the 3.2% expansion in 2018). This slower but still robust growth is a main driver of continued solid profitability. There are significant downside risks to growth from trade wars and political uncertainties such as with BREXIT, but the consensus view is that these factors will not offset the positive impetus from expansionary fiscal policy and growing business investment in major economies.

Fuel Costs: The 2019 industry outlook is based on an anticipated average oil price of $65/barrel (Brent) which is lower than the $73/barrel (Brent) experienced in 2018, following the increase in U.S. oil output and rising oil inventories. This is welcome relief for airlines which have seen jet fuel prices fall, albeit at a slower pace owing to the impact of low-sulfur environmental measures undertaken by the marine sector that have increased demand for diesel (which competes with jet fuel for refinery capacity).

Nonetheless, jet fuel prices are expected to average $81.3/barrel in 2019, lower than the $87.6/barrel average for 2018). The full impact of this decline will be delayed due to heavy levels of hedging in some regions. Fuel is expected to account for 24.2% of the average airline’s operating costs (an increase from 23.5% forecast for 2018).

Labour: Total employment by airlines is expected to reach 2.9 million in 2019, up 2.2% on 2018. Wages are also rising, reflecting tight labour markets, and it is expected that unit labour costs will increase by 2.1% in 2019 after a long period of stability.

Passenger traffic (RPKs) is expected to grow 6% in 2019, which will outpace the forecast capacity (ASKs) increase of 5.8%, and remains above the 20-year trend growth rate. This in turn will increase load factors and support a 1.4% increase in yields (partially clawing back the 0.9% fall experienced in 2018). Passenger revenues, excluding ancillaries, are expected to reach US$606 billion (up from US$564 billion in 2018).

All regions, except Africa, are expected to report profits in 2018 and 2019. IATA believes that carriers in North America will continue to lead on financial performance, accounting for nearly half of the industry’s total profits. Financial performance is expected to improve compared to 2018 in all regions except for Europe, where improvement has been delayed by the high degree of fuel hedging.

North American carriers are expected to deliver the strongest financial performance in 2019 with a US$16.6 billion net profit (up from US$14.7 billion in 2018). That is a 6.0% net margin and represents a net profit of $16.77 per passenger, a marked improvement from just six years earlier. Net margin is up from 2018 (5.7%) as low levels of fuel hedging allows lower prices to impact immediately. Profits are further bolstered by high load factors and ancillary revenues.