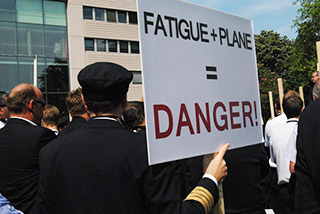 The changes to the Canadian Aviation Regulations introduce:

The new regulations apply to both major Canadian airlines and smaller and regional operators.

Transport Canada says that since 2015, it has undertaken significant consultations and conducted over 100 meetings with airlines, small air operators, pilots, unions, associations and other industry stakeholders to raise awareness of the upcoming changes to the regulations.

Under the new regs, the maximum number of hours a pilot can fly in a calendar year is decreased from 1,200 hours to 1,000. The maximum shift duration falls from its current 14 hours of flight duty to 13 hours – and even that number is only reachable during certain times of day and for certain flights. Depending on the time and geography, some pilots will be restricted to a nine-hour flight duty shift maximum.

“Science has told us that for pilots who fly at certain times of day, fatigue is a more major factor,” Transportation Minister Marc Garneau said at a press conference announcing the new regulations.

Pilots will also be given longer mandatory rest periods. Existing rules allow for an eight-hour break plus additional time for meals and travel, adding up to 10 or 11 hours. Under the new rules, pilots will have between 10 and 12 hours of rest, depending on where they spend their breaks.

Airlines will be able get around the new regulations in some cases by implementing a fatigue risk management system for their pilots, which will require Transport Canada approval. This system could potentially be used to keep pilots on-duty longer during lengthy international flights or while delivering cargo to remote northern communities.

Transport Canada is also introducing amendments to the Fit for Duty regulations that will prohibit any flight crew member to work when not fit for duty. This includes consumption of alcohol or drugs, mental and physical conditions, and fatigue. The amendments will also prohibit a crew member from working within 12 hours of drinking alcohol, up from the previous limit of eight hours.

A statement from Transport Canada reads:

"The Government of Canada is committed to improving the safety of Canadians and to reducing fatigue-related risks in all transportation modes. Transport Canada's new regulations align with today's scientific data, international standards and best practices, and respond to concerns raised by communities, pilots and airlines. By providing air operators the option to implement Fatigue Risk Management Systems, these new regulations also recognize the unique operations and realities of Canadian air operators."

Dan Adamus, the Canadian president of the Air Line Pilots Association, said his group is pleased with the new regulations.

“For too long, Canada has lagged far behind the rest of the world in ensuring its pilots are well-rested when they fly,” he said.

However, the Air Canada Pilots Association, the largest single pilot group in Canada -- representing more than 4,000 professional pilots across Canada and those who fly the majority of Canadian long-haul flights, says it is “gravely disappointed” with what it calls “substandard fatigue rules.”

"To say that we are profoundly disappointed is an understatement. These substandard rules leave a two-hour gap between the maximum flight time for Canadian pilots flying at night, compared to what's recommended by NASA's Ames Research Centre, and two and a half hours longer than what U.S. pilots are allowed to fly," said Captain Matt Hogan, Chair of the ACPA Master Elected Council. "It is unbelievable that in the face of scientific evidence and international best practice our government expects pilots to fly two hours longer than what NASA says is safe."

ACPA says the new rules will significantly impact Air Canada pilots flying for Air Canada Rouge, who will be subject to weaker fatigue regulations than on Air Canada's mainline. ACPA had proposed that measures be put in place to protect all pilots flying overseas long-haul flights at night.

"This is the first time in 20 years that Canada has updated its fatigue rules, yet here the government is delaying implementation until 2022 for smaller operators," said Milt Isaacs, CEO of ACPA. "The government's own statistics conclusively prove that it's these very pilots who need the most protection. It's unacceptable that they're forced to wait the longest for the new rules."

“The government spent a decade developing these new rules, and operators now have a way to bypass the new regulations. By the government's own estimation, FRMS is expected to be implemented by operators on up to 20% of regulated flights, meaning that one fifth of flights would essentially have no effective oversight,” read an ACPA statement.

"The safety of our guests and our crew is of utmost importance," said Scott Wilson, WestJet Vice-President, Operations. "We welcome the Minister's announcement outlining the move to new flight and duty time regulations. Utilizing scientific principles on fatigue will provide prevention and mitigation while aligning with international standards and best practices."