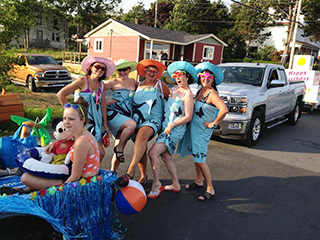 The ladies at LeGrow's Travel Bay Roberts are always on the go supporting community causes.

With a history dating back almost 70 years and now in 117 locations across Canada, Maritime Travel has deep roots in this country. And part of that legacy is its involvement at a community level.

“We have a lot of agencies in smaller communities and in rural areas and we find it much more effective when our staff support local causes, and we strongly encourage that,” Blair Jerrett, Senior Director of Marketing told Open Jaw. “They don’t need to clear it with head office, but we support them with creative services such as providing ads and flyers.”

The range of charitable involvement is therefore quite broad, but Jarrett says he sees a lot of support for local food banks, particularly at this time of year.  “Or perhaps someone in the community has fallen ill with a disease or a community centre is being built, the support will be directed that way.” A group of B.C. agencies recently promoted travel to the Canadian arctic in a series of consumer shows, and donated the $10 admission fee to northern indigenous communities.

Being a company with so many female employees, Maritime has also had staffers touched by breast cancer, so it supports research towards a cure. “At the trade show at our last conference, staffers took it on themselves to hold a 50-50 draw among staff and suppliers to raise funds for breast cancer research.”

“We’re always on the go, supporting one thing or another,” says travel counsellor Lori Pike. “I even went to jail for charity! This was in support of The Citizens’ Crime Prevention Association of Newfoundland, which is an educational program for the local youth.” Community members had to post bail to get her out.

Head Office undertakes its own charity support, with Jerrett estimating he receives over a hundred requests a year. Maritime routinely supports hospitals, shelters, children’s charities and more with donated Maritime gift cards and branded merchandise such as phone chargers, beach totes and more.

“We’re always impressed by how our branches use their initiative to support the causes nearest and dearest to them,” says Jerrett. “Our staff? They are truly a caring bunch.”