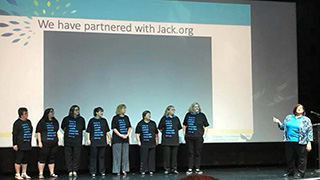 TPI’s Zeina Gedeon and just some of the team who are proud to support Jack.org.

It’s no secret that the number of charities a retailer can support is almost limitless. But for TPI the choice is clear:  Jack.org and its youthful volunteers helping young Canadians with mental health challenges is not just deserving but timely.

“In the past we supported a variety of charities, such as Sick Kids, Children’s Wish and so on, but we decided to form a committee to select a charity that had to be national and had to be new to us,” says Zeina Gedeon, CEO of TPI. “And mental health has been so much in the news lately that this was a perfect fit.”

Jack’s approach is revolutionary:  it’s all about training young people how to talk to their peers about mental health (the target audience is Canadians 15 – 24). After all, they share the same outlook, same problems, same vocabulary. In its 7-year history the charity has grown to 187 chapters across the country tasked with training volunteers – who now include several sons and daughters of TPI advisors.

TPI, which itself comprises 850 advisors and a head office staff of 50, officially launched its two-year partnership with Jack last month. $13,000 was raised auctioning off an AMA cruise, AC tickets to the Caribbean and a trip to Bali. The chain is continuing its efforts with, for example, advising clients they are donating “Jack Dollars” instead of offering corporate gifts this year, and asking suppliers to donate to Jack in lieu of giving them gifts. TPI even has its own page on the Jack site. Friendly rivalry is encouraged between the three regions across Canada.

According to Eric Windeler, Founder & Executive Director, Jack.org: “Jack.org is so excited to have such remarkable support from TPI as we work to revolutionize mental health in Canada. With staff and advisors across the country, TPI is uniquely positioned to support our work across every province and territory. With TPI’s help, Jack.org’s young leaders will reach over 150,000 of their peers through mental health awareness, education and advocacy initiatives this school year alone.”

“Our advisors have told us they are happy we’ve chosen a mental health cause,” says Gedeon, “And especially because this one touches the young. Our young people have been too shy or ashamed to talk about it, and now they can...thanks to Jack.”