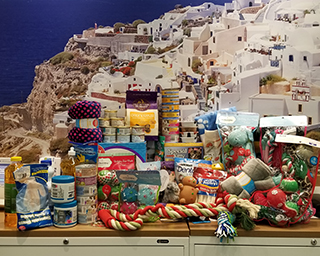 Some of the treats collected for Winnipeg Pet Rescue by the Transat Travel Polo Park agency.

Giving locally is what it’s all about with TDC

With its varied roots and 500 diverse locations across the country, TDC encourages its locations to determine their own charitable efforts. Not surprisingly, the branches come up with some imaginative ways to support their favourite causes!

Take the Transat Travel location in Sarnia, ON. Regional Manager Rob Stockman reports that the agency held a fundraiser to support breast cancer research in honour of colleague Krista Pask who is battling the disease. Thanks to head office, which supplied a TS seat to Europe as raffle grand prize, the branch has raised $35,000.

Over at the Elbow Drive location of Marlin Travel in Calgary, the charitable focus for several years has been on fundraising to supply Christmas trees for families who cannot afford their own. “We enjoy helping out a family who otherwise might not be able to have a tree,” says Regional Manager/Alberta, Carol Thorne. The branch also collects food bank donations.

Four-legged friends are in for treats thanks to the staff at Transat Travel Polo Park in Winnipeg. This is the second year the branch has gotten involved supporting Winnipeg Pet Rescue, collecting much-needed items as requested by the charity. Donations are collected at the branch, and donors can win a $100 Transat gift card or tickets to a Manitoba Moose hockey game. The goal this year? “To exceed last year!” according to Suzanne Watson, Regional Manager/Manitoba & BC.

All six Quebec City area branches of Voyages Transat have chosen Rêves d’Enfants (Children’s Wish) as recipient of their fundraising efforts. In March they will participate in the Heroes’ Challenge Experience wherein volunteers team up with a wish child to grant his or her most heartfelt wish. But it’s not just about a day of feeling good: teams must raise $10,000, the average cost of fulfilling a wish, in order to participate. France Gauthier, Regional Manager, Quebec is encouraging her team members to “Take up the challenge and be a hero today!” Good luck to them all!