What's New (And Old) In The Bahamas 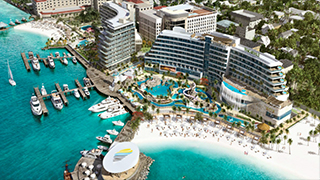 The Bahamas is starting the New Year on the right foot with a positive outlook on 2019 visitor numbers, but last year, although gone and done, still deserves proper recognition as the Caribbean destination was honoured with several awards and enjoyed an upwards growth trend throughout 2018.

According to website traffic reports on DestinationRecommended.com, a destination rating and review website, The Bahamas was the second most-searched Caribbean destination.

And it’s obvious why. The island’s pristine beaches, dazzling coastline corals and crystal-clear waters are second to none, and were recognized with the country receiving several awards and recognition.

Although it’s early in 2019, The Bahamas is already seeing solid visitor prognosis numbers for 2019, according to the January Forward Keys survey, which tracks inbound visitor data. The survey reported forward bookings for the next three months are ahead by 8.9.

And with the island’s rising profile, the list of accommodations and things to do keeps growing, including a high-profile new resort. Jimmy Buffet's Margaritaville hotel brand is expanding into Nassau with the Margaritaville Resort Bahamas opening later this year. The resort will have 150 guest rooms and 150 oceanfront residences.

This year the Bahamas will also be a little bit more accessible, at least visually, with a brilliantly colourful new film, Wonders of the Sea 3D, featuring renowned oceanographic explorer, Jean-Michael Cousteau. Nearly 40% of the new underwater documentary was filmed in the Bahamas, revealing oceanic life that cannot be seen by the naked eye and highlighting current threats that are harming our oceans.