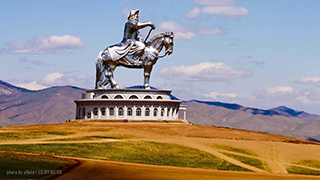 Canadians could soon have air links with Mongolia.

Transport Canada says the agreements are a step towards further diversifying international markets for travellers and facilitating export opportunities for Canadian businesses.

The new agreement with St. Vincent and the Grenadines is an Open Skies-type agreement, which allows an unlimited number of passenger and cargo flights between the two countries.

The expanded air transport agreements with Algeria, Qatar and Jordan allow select airlines to operate more flights per week to and from Canada. The Canada-Jordan agreement additionally allows designated airlines to serve any city in the other country’s territory.

Code-sharing agreements, when an air carrier sells seats on a flight operated by another air carrier, have been struck with Côte-d'Ivoire and Mongolia.

Canada has air transport agreements with more than 105 countries.