Just months after announcing an expansion to its Canadian offering with Vancouver-Reykjavik
service scheduled to begin this June, WOW Air has apparently cancelled its plans.

The move is part of a major scaling back by the Iceland-based low-cost long-haul carrier. It flew to 12 U.S. cities last year, but will focus on just four this summer as it seeks to rebuild its finances after running into cash flow problems last year.

In OCT 2018, WOW announced that starting JUN 2019, it would offer six weekly seasonal flights out of YVR with one-way fares to Reykjavik starting as low as $129. Ticket sales for the new flight opened on 22OCT. While WOW has not officially announced the YVR route’s cancellation, the flights are no longer listed on its website.

“Vancouver WOW passengers check your flights! WOW Air@pulling out of Vancouver before they have even taken off @yvr @WOWAirScams @wowairsupport,” posted a user to Twitter yesterday.

WOW Air launched in 2012 and enjoyed rapid growth over its first few years of operation. 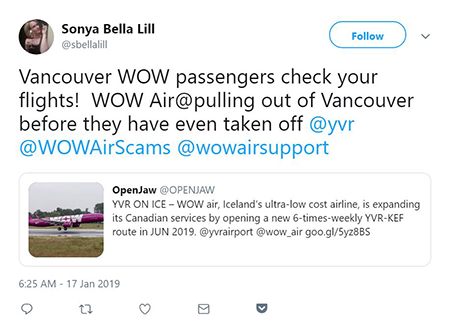