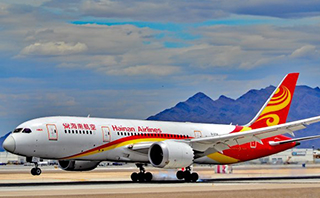 China’s Hainan Airlines plans to launch non-stop service between Shenzhen, a major city in southeastern China, and YVR, on 28JAN, with two weekly flights on Mondays and Fridays. The service will be the first non-stop international route connecting Shenzhen and a city in Canada.

A Boeing 787-9 wide-body aircraft will service the new routes, equipped with on-demand entertainment for each passenger and meal options from both Western and Oriental cuisines. Business class will be equipped with reverse herringbone seating giving all pax aisle access, and all passengers will be able to use their portable electronic devices on board.

In Canada, the airline also operates routes from Calgary, Toronto and Vancouver.