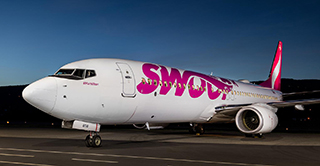 Swoop has added London ON, Kelowna BC and Oakland CA, as new destinations for its summer non-stop flight schedule as of 28APR. The new schedule also boasts five new domestic markets, two new transborder markets and an extension of two international routes.

The five new national flights include:

In US travel, Edmonton will have increased transborder capacity with thrice-weekly flights to/from Oakland and a weekly flight to/from Orlando.

Internationally, Swoop will continue its weekly summer service from Hamilton to Montego Bay and Cancun.

"We have created a schedule that leverages our existing network while expanding to a limited number of strategic destinations,” he said.