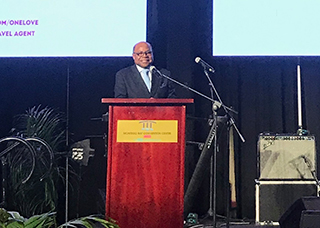 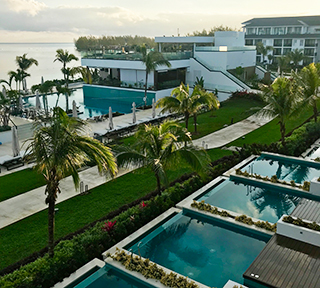 Excellence Oyster Bay in Falmouth was one of Jamaica's newest resorts that opened last year with 315 rooms. 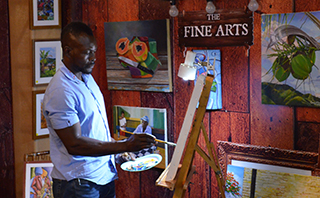 In recognition of the craft industry as a driver for growth in the earnings from tourism, five artisan villages are slated to be built across the island. Construction is already underway for the first village in Falmouth. Pictured is a model of the Artisan Village at the Caribbean Travel Marketplace.

Jamaica has worked for years to inspire tourists to discover the island outside of resort walls. And for good reason – this nation of just 2.7 million is incredibly rich in art, culture, music, cuisine and natural beauty.

But as the media bus trudged through heavy traffic Jamaica’s Highway A1 from Falmouth to the CHTA Marketplace in Montego Bay, you couldn’t help but wonder how a tourist would experience such a delay. Poor infrastructure is a long-time problem for Jamaica tourism -- but there’s help on the way.

As one element of its ‘5 Pillar’ plan for tourism growth, the Caribbean island seeks to tackle this issue and make cross-Jamaica travel more appealing and safer for both visitors and locals.

The signs of success are already there. Jamaica welcomed a record 4.3 million visitors last year, a 5.3% increase over 2017. The country also grew its tourism revenues by 8.6% over 2017, generating earnings of US$3.3 billion. That’s the more important statistic as it suggests people are getting out and spending more on the island.

At the Caribbean Hotel and Tourism Association Marketplace 2019, Minister of Tourism Edmund Bartlett said that by focusing on the five pillars, Jamaica hopes to grow stopover arrivals by an additional 7.5% and total visitors by 5% in 2019.

“We have a deliberate strategy to embrace a more experiential approach to visitors that come to our shores by encouraging and creating opportunities for them to have great experiences within the destination, and to participate and to support our attractions, our tours, places to go, restaurants,” Bartlett said.

According to updates provided at the CHTA, Jamaica is well-poised for continuing tourism success, with upgrades in hotels and airlift, expansion into the coveted Chinese market, investments in human resources and infrastructure improvements. Here’s a closer look:

In recent years, Jamaica has invested considerably in roadway construction and expansion, including a new highway that shaved the drive time from Kingston to Ocho Rios nearly in half. Now Director of Tourism Donovan White is promising “immediate plans” to create a highway bypass around Montego Bay. He says the project is a government priority and could be completed within two years. That would help solve an ongoing bottleneck.

Jamaica has an impressive pipeline of some 7,500 rooms to open within the next few years, adding to its existing portfolio of approximately 30,000 rooms.

This year, the redeveloped Wyndham Kingston will be back with 454 fresh rooms, while the Sandals-developed AC Kingston will bring 220 rooms to the capital. Ground will be broken this year for a 1,000-room project by Spanish chain H10 in Trelawny, of which half are expected to become available in NOV this year.

Jamaica has also finalized an arrangement with Princess Resorts, another Spanish-owned consortium, for a 2,000-room property, with the first half to be completed by end of 2020. White called the Princess project, to be built in Green Island between Negril and Lucea on the northwest coast, “a sight to behold.”

The hotel expansion comes at an opportune time, as buyers from China attended the CHTA Marketplace in larger than ever numbers. "It has been a little while trying to get the Chinese market to be activated. I think that we are now at a point where we can begin to engage air connectivity, which is very important to us,” said Minister Bartlett.

To accommodate the anticipated increase in visitors and airlift capacity, Jamaica is putting concentrated efforts into the expansion and improvement of Sangster International Airport (MBJ). An expansion is underway to the departure terminal to expand capacity inside the airport, as well as to the apron of the runway to facilitate larger planes.

An additional 30 automated immigration kiosks have been installed to facilitate faster transit of passengers, bringing the total number of kiosks up to 50. According to White, processing time now is down to less than 20 minutes whereas before, it was closer to 40.

In recognizing that tourism is a sector critical to the Jamaican economy, the government has taken steps to invest in the people who make the industry possible.

In the last 2.5 years, Jamaica has introduced a two-year associate degree in hospitality management, introduced an initiative to launch the first tourism workers’ pension plan later this year, and created the Jamaica Centre of Tourism Innovation which, to date, has helped train and certify 600 workers and proposes to certify another 1,200 in 2019.

Jamaica is also offering marketing support for small enterprises that lack the capacity to market themselves.