The cost of air travel in Canada will soar if the federal government imposes a backstop carbon tax on air travel in 2019, according to a new study released by the National Airlines Council of Canada (NACC).

The study, "Evaluation of Federal Carbon Tax Costs on Domestic Air Travel: 2019 -2030," is the third in a series conducted for NACC by AirTrav, a Toronto-based international aviation industry consultancy.

It examines the cost impact of a federal carbon tax on different domestic routes, starting in 2019 with point-to-point flights within New Brunswick, Ontario, Manitoba and Saskatchewan.

The study shows that a domestic carbon tax would add more than $800 million a year to the cost of air travel in Canada by 2030. The authors say that in a vast country with a dispersed population that relies on air travel, such an increase would significantly impact citizens.

"An increase that large would hurt individuals and families who rely on air travel for work, to visit family, and for basic necessities,” said Massimo Bergamini, President and CEO of NACC. "It would also hurt Canada's visitor economy, encourage even more Canadians to consider lower cost U.S. airports and travel destinations, and jeopardize the long-term sustainability of our aviation industry.”

The study results suggested that, if implemented, a carbon tax on air travel would add hundreds of millions of dollars to the cost of domestic air travel, curb growth in the visitor economy, penalize small and remote communities, and encourage still more Canadians to explore U.S. airports and destinations.

Moreover, one of the unintended consequences of a carbon tax as a pricing mechanism for air travel is that it will penalize residents of small and remote communities that depend on air travel. Most flights in and out of these communities use aircraft that are older, less fuel-efficient and smaller, making the per-passenger cost of the carbon tax higher.

The first study in the series, "Carbon Pricing in the Canadian Aviation Sector," published in MAY 2018, found that a carbon tax would not be successful reducing carbon emissions in the medium term because the aviation industry has already reduced emissions as much as possible with current technology.

The study also found that a carbon-offset system, similar to that adopted in 2016 by the International Civil Aviation Organization (ICAO) for international flights, was better suited to the industry and would result in measurable emission reductions.

The second study, "Impacts and Analysis of Carbon Pricing on Canada's Trade Exposed Aviation Sector," published in OCT 2018, examined some of the market distortions that a carbon tax on air travel would cause. 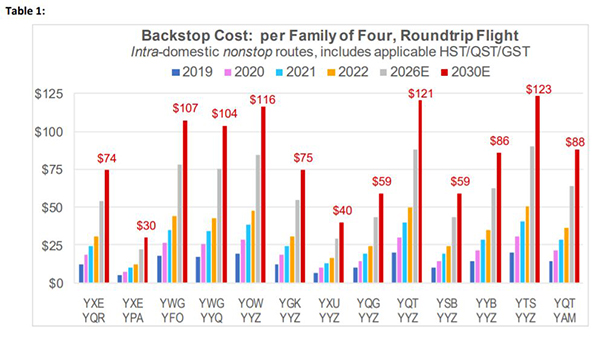 This table illustrates how a federal carbon tax on air travel would affect a family of four travelling between two communities in either Ontario, Manitoba or Saskatchewan.