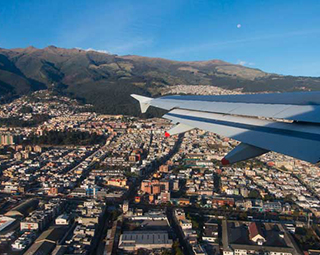 The new YYZ-UIO route, to be operated three-times weekly on a seasonal basis by Air Canada Rouge, will be the first non-stop service to Ecuador from Canada when it begins 8DEC, 2019, subject to obtaining the necessary government approvals.

"Air Canada is expanding its footprint in South America as part of its ongoing international growth strategy from our Toronto global hub. As the capital of Ecuador, Quito is both an important tourism and cargo market, and Ecuador has a growing number of Canadians living in the country who will also benefit from this convenient non-stop service," said Mark Galardo, Vice President, Network Planning.

"As well, our expansion in South America gives us an opportunity to efficiently deploy our aircraft during the winter months when southern destinations are more popular."

"This new non-stop flight will act as a catalyst to strengthen existing ties between Ecuador and Canada by facilitating mobility for tourists and students; encouraging commercial exchange and opening new doors to further expand the breadth of our relations. Congratulations to Air Canada and to the Airport of Quito for this important success!"

AC has also finalized a Memorandum of Understanding with Star Alliance partner Air New Zealand to pursue expanding its current alliance arrangement to strategically co-operate in the form of a Joint Venture, subject to Air Canada and Air New Zealand making the necessary filings, obtaining competition and other regulatory approvals and finalizing documentation.

"We are delighted to add Auckland as we continue strategically expanding Air Canada's international network and increasing its presence in the Asia-Pacific market," said Lucie Guillemette, Executive Vice President and Chief Commercial Officer at Air Canada.

"The launch of Auckland service in December will be of particular interest to New Zealanders travelling for a Canadian winter vacation, and to North Americans travelling to enjoy New Zealand's vibrant multicultural urban and natural attractions during their summer season."

AC says it has timed Auckland flights to conveniently connect at its YVR trans-Pacific hub to and from a multitude of non-stop destinations throughout North America including New York-Newark.

Finally, AC today announced new winter service from Montreal to São Paulo, Brazil, the only non-stop flights between the two cities. This new route to São Paulo will commence on 11DEC, 2019 and operate three return-trips weekly from Montreal until 27MAR, 2020.

"Air Canada is continuing its international expansion from Montreal with the introduction of the only non-stop service between Montreal and Brazil. Complementing existing Toronto service, Montreal-São Paulo flights will provide a link to the country's largest city and financial centre while offering a great opportunity for Brazilians looking for a winter vacation in Quebec," said Galardo.

"São Paulo is the twelfth new international destination added by Air Canada from Montreal-Trudeau Airport since 2017, reinforcing further the commitment we have to develop Montreal as a strategic hub."