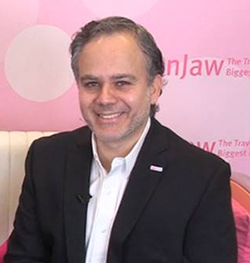 After almost 19 years of existence, the Mexico Tourism Board's (MTB) Toronto office on Bloor has closed indefinitely as of today.

In a personal email to Open Jaw, Cesar Mendoza, the former Regional Director for Canada, highlighted his pleasure working with the Canadian industry throughout the years.

"It has been an absolute honour working and getting to know so many great professionals like yourself for more than 15 years," he wrote. "I will always remain an avid and proud promoter of my beautiful country."

The MTB's annual budget will be redirected to build the Mayan Train, which will connect Quintana Roo, Campeche, Chiapas, Tabasco and Yucatan.

According to Mendoza, Mexico's embassies and consulates around the world will be responsible for tourism-related promotion efforts.

Near the beginning of February, the travel community was surprised to hear Mexico's federal government announced plans to close all but three of its 21 international offices, with only New York, Tokyo and Berlin continuing to operate.

Now, as Travel Agent Central reports, these offices will also close, some time within the first four months of 2019. The Miami office will remain open the longest, closing in May or June of 2019.

Mexico has a five-point plan for tourism going forwards, which will be handled at the national level. In addition to building the Mayan Train, Mexico aims to create a "regionalization policy" that will develop "anchor" products across eight regions.

The country also plans to strengthen its internal market by reducing seasonality in low and medium seasons, as well as diversify its source markets, focusing on international markets with high purchasing power like the United Arab Emirates, China and Russia.

Finally, Mexico will focus on developing multi-sector and inter-institutional partnerships with state and municipal governments, as well as other agencies and entities.