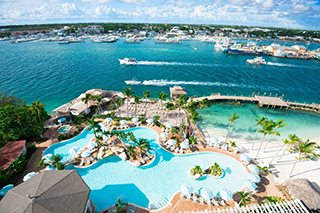 In response to The U.S. Department of State reissuing a Level 2 travel advisory for The Bahamas, The Bahamas Ministry of Tourism & Aviation has put out a statement noting that the vast majority of its 6 million annual visitors enjoy their vacation without any negative incidents.

The U.S. advisory was reissued on 25FEB, advising citizens to "exercise increased caution" due to crime when travelling to the Caribbean island.

"Violent crime, such as burglaries, armed robberies, and sexual assault, is common, even during the day and in tourist areas. Although the family islands are not crime-free, the vast majority of crime occurs on New Providence and Grand Bahama islands," stated the advisory.

According to Royal Bahamas Police data for 2018 there were only 43 incidents involving tourists, of which 30 involved U.S. nationals and nearly all were minor offences. There has also been an overall decrease in many serious crimes on the island: murder has seen a 25% drop, armed robbery decreased by 18%, attempted robbery by 19% and shoplifting 23%.

Safety and security efforts include the use of CCTV, a heightened police presence and additional Beach Enforcement Officers.

"We recommend that travellers to any destination maintain awareness of their surroundings and exercise basic precautions, as they likely would in their home cities and when not on holiday," the Ministry of Tourism wrote in its statement.

The U.S. advisory also went on to note that activities involving commercial recreational watercraft in The Bahamas, such as water tours, are not consistently regulated, maintained or certified and that jet-ski operators have been known to commit sexual assaults against tourists.

On the subject of watercraft activities, The Ministry of Tourism wrote that the government has taken steps to ensure the industry is effectively regulated through the adoption of regional safety codes and regulations. Such Codes stipulate higher inspection standards, mandatory safety equipment required on board vessels, criteria for domestic or home built vessels, dry docking inspections and increased ship manning requirements.

"Safety and security on land and at sea is critically important for visitors and for the Bahamian people," indicated the statement. "Aggressive efforts are underway across all relevant Bahamian ministries and departments to ensure that our islands remain a destination that provides a welcoming environment where visitors enjoy our culture and our citizens enjoy economic opportunity."