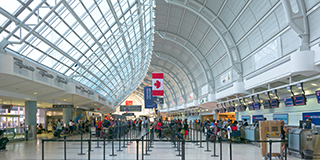 Just as Canada's largest airport gears up to welcome a peak of 144,000 passengers in one day for March Break, Toronto Pearson has been named Best Large Airport in North America by the Airports Council International (ACI) for the second year in a row.

This recognition is part of ACI's Airport Service Quality (ASQ) program, which is considered the gold standard for measuring passenger satisfaction. The ASQ index is the only global benchmarking survey that assesses passenger satisfaction across 34 key performance indicators while at the airport on their day of travel.

"We're extremely grateful to our passengers, who took time out from their travels to give their feedback and for choosing Toronto Pearson as the best large airport in North America again this year," said Howard Eng, President and CEO, Greater Toronto Airports Authority.

"This achievement is possible thanks to the collaboration and innovation of the 50,000 airport colleagues and partners who made a commitment to creating a better airport experience for our passengers and who continue to work every day to bring that vision to life."

This recognition comes at a time when the airport continues to make measurable improvements to its services and infrastructure, including:

Toronto Pearson was also recognized with a second 2018 ASQ Award -- the Most Improved Airport in North America -- for demonstrating the greatest year-over-year improvements of any North American airport participating in the program.

"We're doubly pleased to be recognized as the most improved airport in this category,” continued Eng, “with improvements in nearly 90% of the customer experience indicators measured.”