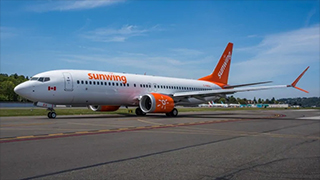 Sunwing has become the first Canadian airline to ground its 737 MAX 8 fleet of four planes. But the company says it didn’t make the move out of safety concerns, rather due to growing airspace bans overseas and “evolving commercial reasons” – which likely translates into passenger anxiety about boarding the aircraft.

Despite mounting pressure, Transport Canada and The Federal Aviation Authority in the United States have said they will not suspend Boeing 737 Max 8 operations, despite calls from around the world to do so.

That pressure increased exponentially yesterday after the European Union’s aviation safety regulator suspended all flights in the bloc by Boeing 737 Max planes. That was the biggest setback yet for the U.S manufacturer following a weekend crash in Ethiopia that killed 157 people. In total, more than 45 countries have now temporarily banned MAX 8s.

Will Canada follow suit? Canadian aviation analyst Robert Kokonis told Open Jaw from a conference in Dubai that in his opinion Transport Canada, Air Canada and WestJet will only make such a move “if the (U.S.) Federal Aviation Administration pulls the plug with an Airworthiness Directive.” Transport Minister Marc Garneau is set to speak on the issue again today at 11 am.

But the crisis is already having a significant impact on Canadian airlines, both with cancelled flights and a passenger base extremely hesitant about flying on the aircraft model.

Two Air Canada flights to England aboard Boeing 737 Max 8 aircraft were cancelled yesterday. London-bound flights from Halifax and St. John's were scrubbed after the UK banned all Max 8 jets in its airspace. In a statement, AC said it was working to rebook affected customers as soon as possible through its Montreal, Toronto and Ottawa hubs. It also said customers could rebook their flights at no added cost.

As for Sunwing, the company says it is working to minimize the impact of its decision to ground its four MAX 8s.

“We are in the process of revising our flying schedule to accommodate the temporary removal of our MAX aircraft from service and we appreciate the patience of our retail partners and customers while we work to communicate these updates. We will endeavour to minimize the impact of these schedule changes, which we believe is achievable given that the MAX 8 makes up less than 10% of our fleet,” a company statement read.

Boeing, the world’s biggest aircraft manufacturer, has said it retains “full confidence” in the 737 MAX. Its shares fell 6.1% on Tuesday, bringing losses to 11.15% since the crash, the steepest two-day loss for the stock since July 2009. The plunge has lopped a stunning US$26.65 billion off Boeing’s market value.

The issue is also straining relations between the airlines and their largest employee groups.

American Airlines and Southwest Airlines flight attendants and ground crews urged the companies to take their Boeing 737 Max airplanes out of service after other carriers around the world suspended the jets following a fatal crash in Ethiopia over the weekend, the workers' unions said Tuesday.