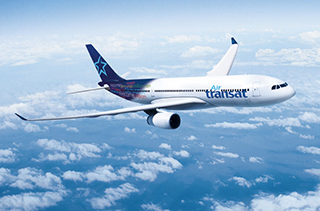 Transat A.T. Inc. has posted a $52.6 million operating loss in its first quarter, compared to a loss of $43.5 million in the same quarter last year. Revenues for the quarter were $647.6 million, a figure comparable to last year.

The company says the higher loss resulted primarily from a rise in operating costs owing to the weakening of the dollar against the U.S. dollar, from higher fuel prices and from additional costs incurred for the transition and optimisation of the Air Transat fleet. The increase in operating costs was not fully offset by a 2.8% higher average selling price in the sun destinations market.

"We're at the heart of the implementation cycle of our strategic plan. The material transformations, especially in the fleet, lead to an increase in costs, which is a necessary step in order to improve our medium-term performance. If we add fuel and currency to that, we did not yet have all the right cards in hand to improve our results,” said Jean‑Marc Eustache, President and Chief Executive Officer of Transat.

“We look forward to seeing our first two A321LRs arrive in the next three months, the first step before we start reaping the benefits of the changes in the coming years."

In the sun destinations market, Transat’s main market for the period, the number of travellers increased by 3.5% with a greater proportion of flight-only sales, which generate lower unit margins than packages. Average selling prices for packages were up 2.8%, whereas those for flight-only sales were down 0.9%.

Transat's sun destination capacity is up 2% compared with last year. To date, 82% of that capacity has been sold, bookings are ahead by 0.6% and the load factors are tracking 3.1% higher compared with 2018.

As at 31JAN, cash and cash equivalents amounted to $620.4 million, compared with $749.3 million on the same date in 2018. Transat says the change resulted primarily from the purchase of a parcel of land in Mexico ($75.7 million), the commissioning costs of aircrafts added to the fleet ($19.9 million) and from a change in the calculation of cash and cash equivalents to be held in trust following the adoption of the new revenue recognition standard IFRS 15 ($32.0 million).

The impact of fluctuations in the Canadian dollar, combined with higher fuel costs, will result in a 2.7% increase in operating expenses if the Canadian dollar relative to the U.S. dollar and fuel prices remain stable. Unit margins are currently tracking 1.1% lower than at the same date last year.

In the transatlantic market, where it is low season, load factors are tracking 7% ahead of last winter. Prices are currently 3.0% lower than those recorded last year.

If these trends continue, Transat expects that second-quarter adjusted operating income could be lower than the restated amount of $12.1 million for 2018.

In the transatlantic market, the Corporation's main market during the summer, Transat's capacity is tracking 1% ahead of 2018. To date, 33% of seats have been sold, load factors are up 2.4% and selling prices are 2.2% lower compared with the same date last year.

Transat says work on its strategic plan continues, with a particular focus on: