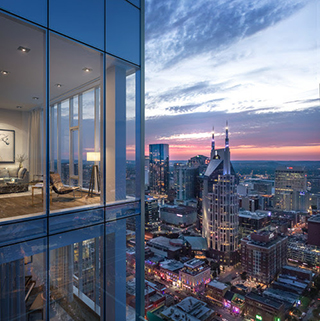 Four Seasons Hotels and Resorts has announced it will open its first property in Tennessee, in the hot tourism destination Nashville. Groundbreaking is expected in April.

"This will be one of the most iconic high-rise buildings in the state of Tennessee," said Dean Stratouly, president of Congress Group, a partner in the project.

"Delivered as LEED Gold and standing 542 feet tall, it will be one of the state's greenest and tallest residential buildings. "

Four Seasons Hotel and Private Residences Nashville will include a five-star, full service luxury hotel with 236 keys, a world-class spa and an array of fitness amenities. In addition, the building will offer for sale luxury residences to be managed by Four Seasons.

"Long recognized for its popular music and entertainment offerings, Nashville is also home to one of the most vibrant culinary and arts scenes in the United States,” says Bart Carnahan, EVP, Global Business Development and Portfolio Management, Four Seasons Hotels and Resorts. "We look forward to welcoming guests and residents to experience this dynamic city with Four Seasons."

The development continues the momentum and growth of the SoBro area of Nashville, affirming its emergence as one of the most dynamic urban areas in the city. The new hotel will be located along the Cumberland River, within a block of culinary and nightlife experiences on Broadway, West Riverfront Park, Nissan Stadium, and the award-winning Ascend Amphitheater.