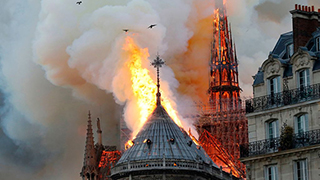 Air France and Air France-KLM have made a grand gesture in the wake of yesterday’s fire at the Notre-Dame cathedral in Paris.

Describing the cathedral as “a symbol of French history,” Air France and KLM said in a statement that their teams around the world “have been deeply affected and saddened since yesterday.”

The Air France-KLM group says in the coming days it will set up a voluntary donations fund for its customers to help finance the reconstruction work.