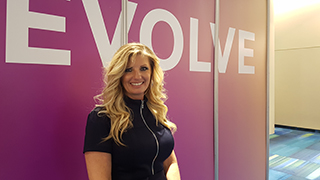 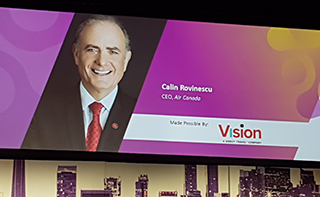 It’s not every day you get to eavesdrop on a conversation between two execs – one of whom happens to run one of the largest corporations of the country.

So it’s no wonder some 900 of us paid close attention when Michael McCormick, Exec Director and COO of the Global Business Travel Association, took to the stage with Calin Rovinescu, CEO of Air Canada at this week’s GBTA convention in Toronto.

This year marks the 10thanniversary of Rovinescu’s role at the helm of AC, and what a decade it has been. Back then the economy was in a turmoil and, he recalled, “We were short of cash and prospects. Everyone was unhappy: shareholders, creditors, clients and staff.” Today? The share price is up some 4,000% from when he took over (then a paltry $0.78, it is now $32.22).

But some things never change. “Virtually everyone has an opinion of what we do. We get to play multi-dimensional chess in a fishbowl.”

And what about today’s hot buttons?

McCormick pointed out he simply had to ask about the “black swan” event: the grounding of B737 MAX aircraft around the world. Rovinescu responded: “This was an unprecedented event, more complicated in some respects than 9/11. These aircraft represent 18-20% of our fleet – some 12,000 passengers a day. But when it does come back there will a high level of comfort and we will all have to work together to make it so.”

How about the return of Aeroplan under the Air Canada wing, after it was spun out some 20 years ago in a search for liquidity? “This is a big milestone for us – our most significant acquisition since we bought Canadian Airlines. An airline needs to own its own passenger data. So the timing on this couldn’t be better -- and people will be very pleasantly surprised to see the scale of the program,” Rovinescu said.

Low-cost carriers. Ultra-low-cost carriers? “You have to pick your spot. We decided not to be all things to all people. But Rouge, designed for the leisure market, now carries 5 million passengers a year.  It’s a fantastic way to maintain share in the Caribbean, Florida and Europe leisure market.”

Finally, Rovinescu mentioned the recent headline that made him beam with pride: America’s Wall Street Journal declared  that “Savvy US Travelers Take Air Canada.”Positioning YVR, YYZ and YUL as hubs for Americans travelling beyond North America is clearly paying off. No doubt such strategies have helped AC to compete with the best carriers in the world.