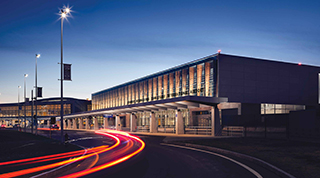 YQB’s 2018 annual report has revealed an historic increase in passenger traffic and a healthy financial situation.

Throughout 2018, several airlines increased flying from YQB. Some highlights include:

"I have been working to develop our airport and our region for more than two decades. I am proud to note that passenger travel at YQB has increased from 643,000 passengers in 2001 to 1.775 million passengers in 2018,” says Gaëtan Gagné, President and CEO of YQB. “The fact that passenger numbers have practically tripled over this period is not down to chance, but the result of an orchestrated plan with a clear emphasis on putting the passenger first."

As passenger traffic and airline service continues to grow, YQB is nearing the end of the largest infrastructure expansion project in its history – a $500 million terminal expansion that boasts four new gates, an expanded restaurant area and more baggage carousels.

The airport ended 2018 with an overall net income of $11.1 million, after posting revenues of $68.2 million and operating expenditure of $57 million. Earnings before interest, tax, depreciation and amortization (EBITDA) were $27.7 million. All profits will be reinvested to increase the range of services for passengers and limit the use of debt.