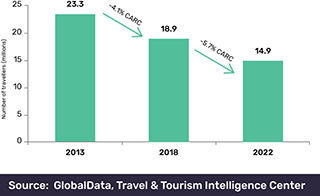 The number of outbound travellers departing from Canada to the U.S. is set for continuous decline, according to GlobalData’s latest report, “Tourism Source Market Insight: Canada.”

It says that a combination of the ‘Trump slump,’ reluctance of repeat visits and the increase in wallet-friendly flights to Mexico have inspired Canadians to travel elsewhere.

“The U.S. has long been and still is the most popular destination for Canadians. Affordability and accessibility is of great importance to them and the U.S. provides this in abundance,” said Ralph Hollister, Travel and Tourism Associate Analyst at GlobalData.

“However, destinations which can provide cheap flights such as Mexico and low cost, novel experiences such as India are experiencing high growth in Canadian visitor numbers as millennials, aged 22-36, and baby boomers, aged 55-75, have realized their money can get them further afield.”

From 2013 to 2018, Canadian visitors to the U.S. decreased from 23.3 million to 18.9 million. This decline, which was initially caused by the 2015 recession, indicated the start of a change in demand from Canadian tourists.

Now, even though the economy in Canada has improved in recent years, external political factors such as the Trump presidency have further deterred Canadians from travelling to the U.S.

“Canada is one of the slowest growing markets for outbound tourism out of all Group of Seven (G-7) countries, which is a trend that international destinations attempting to attract Canadian tourism need to be mindful of. Canada’s economy has been experiencing improved growth in recent years compared to countries with a higher total GDP in the G-7 group. But this has not encouraged a large increase in Canadians taking international vacations, mainly being due to the perceived cost of international travel,” says Hollister.

Currently 33% of Canadians have no holiday plans, according to GlobalData, a statistic that is concerning for both domestic and international destinations.

Furthermore, 23% of Canadians now typically take city breaks, which is a growing share of the source market. Cities further inland in the U.S. -- such as Denver and Dallas -- should be visibly promoted to Canadian tourists by VisitUSA, writes GlobalData, as this strategy will potentially motivate Canadians to return to experience a different aspect of their tourism product.

Dave Heron - April 29, 2019 @ 11:06
When you combine a 35% exchange rate with the current US administration's less than warm and fuzzy relationship with the rest of the world - the drop even from it's next door neighbor comes as no great surprise!