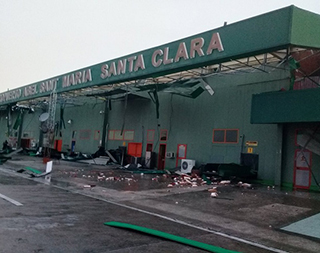 Local media in Cuba are reporting that a severe storm hit Abel Santamaría International Airport in Santa Clara, Cuba on Sunday afternoon, causing heavy damage to the roof of the terminal and the power line of the facility.

Strong rain and wind, and large hailstones knocked down power lines and trees in several locations in the country’s west and central regions. There were no human casualties.

Open Jaw Quebec reports that approximately 800 square metres of roofing on the airport was damaged and the power was out for some time.

As the news outlet reported yesterday, flights to Santa Clara were cancelled until further notice.

“We have a return flight from Santa Clara to Montreal scheduled for today,” wrote Debbie Cabana, Director of Marketing with Air Transat, in an email to Open Jaw Quebec yesterday. “Since the Santa Clara airport is closed, departures will operate from Varadero. Our clients will be transferred from their hotel to the Varadero airport.”

Clients flying with Sunwing have also been redirected via neighbouring airports.

“We are in direct communications with the local authorities and we are waiting for updates on the reopening of the airport later in the day. No flights were cancelled,” Marie-Josée Carrière, Senior Marketing Director for Québec with Sunwing, told Open Jaw Quebec yesterday.