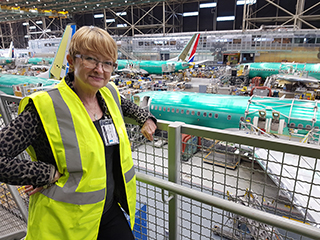 Open Jaw’s Martha Chapman at the Boeing factory in Seattle

The Boeing 737 MAX has dominated the travel industry news this year, and the elephant in the room is what will happen when it eventually comes back into service.

Will passengers willingly climb on board what many observers say will be the safest plane in the air on its return? Or will they remember the two crashes in five months that took the lives of 346 people? Will travel agents notify their clients when they are booked on MAX planes to prevent airport anxiety attacks? Will agents themselves feel comfortable stepping on to a MAX plane?

No one has all the answers (much less all the details) but we thought it would be an interesting exercise to poll some travel professionals on their thoughts and predictions for the future.

The fact that the aircraft is not currently in service has taken the issue off the front burner, with broad consumer awareness that all of the planes are grounded for at least the next few months.

“It’s gone off the radar.  I do a lot of packages and people rarely ask about aircraft type,” said Shy Virji of Gala Travel. A TravelOnly agent echoed, “Most leisure travellers don’t even ask. It’s the business travellers who ask about the aircraft type. But Boeing must make sure they are completely okay when they return.”

Liz Bardowell of Pure Magic Vacations agreed that the issue is no longer on the front page, but when the 737 MAX 8 returns to the skies, she thinks a major PR exercise will need to be successfully implemented: “It will depend on the messaging from Boeing.”

Steven Latanville of Expedia CruiseShipCenters reflected a more pessimistic view.  “I’ve never flown one, and I’m not going to fly one until it’s been back in service for a year.”

But Hymie Lebowitz of YYZ Travel is a diehard fan of the aircraft and will happily board when the MAX returns to service, having undergone an unprecedented amount of scrutiny in the recertification process.

“They have to correct the problem, of course,” says Lebowitz.  “But this aircraft is magnificent and a pleasure to fly. After the problem will be corrected it will be just fine – it’s a beautiful, quiet flight – nothing short of magnificent.”