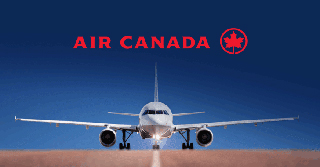 "I am pleased to report excellent first quarter results for Air Canada, despite several challenges in the quarter. We set records of $4.453 billion in operating revenue and $6.877 billion in liquidity for the period and delivered on a system yield improvement of 5.0% over last year's first quarter,” said Calin Rovinescu, President and CEO.

“Contributing to our performance was the completion of two key strategic initiatives early in the quarter with better than expected results -- our acquisition of the Aeroplan loyalty program and our conclusion of a new capacity purchase agreement with Chorus Aviation for flying by Jazz.  We are further encouraged by strong booking trends entering the busy summer peak."

Rovinescu says the past several financial reporting periods “are an affirmation of our ability to operate on a sustainably profitable basis, notwithstanding fuel price or foreign currency fluctuations or other unexpected challenges.”

AC says it has now realized or identified savings of $242 million, or 97%, of its previously announced two-year $250 million ‘Cost Transformation Program’ to 31DEC, 2019.

The airline says it has performed well in mitigating the temporary loss of its 737 MAX aircraft.

"The grounding of the Boeing 737 MAX aircraft following Transport Canada's and other regulators' decisions resulted in the unexpected removal of 24 aircraft from our fleet during the last 18 days of the quarter, with the associated cost and revenue impact,” Rovinescu said.

“The agility of our business model, the flexibility of our fleet and our team's "can-do" culture was on full display as we adjusted to these unexpected circumstances. This is further evidence of the changed culture at Air Canada, with its emphasis on nimble decision-making and a focus on customer care," he added.

In the business cabin, system passenger revenues increased $90 million or 12.4% from the first quarter of 2018 on traffic and yield growth of 8.0% and 4.1%, respectively.

At 31MAR, 2019, unrestricted liquidity (cash, cash equivalents, short-term investments and undrawn lines of credit) amounted to a record $6.877 billion. Net debt of $3.820 billion decreased $1.394 billion from 31DEC, 2018, reflecting an increase in cash, cash equivalents and short-term investment balances of $1.169 billion and, to a lesser extent, a decrease in long-term debt and lease liabilities of $225 million.

Air Canada announced in a15MAR news release that it was suspending the financial guidance it provided on 15FEB and 28FEB in respect of the 2019 financial year, given the grounding of the Boeing 737 MAX aircraft until further notice and Boeing's decision to suspend MAX deliveries to airline customers.