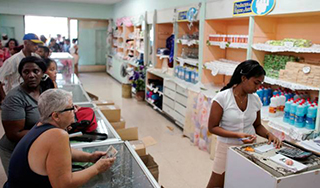 The Cuban government is launching widespread rationing of chicken, eggs, rice, beans, soap and other basic products in the face of a worsening economic crisis.

Commerce Minister Betsy Diaz Velazquez told the state-run Cuban News Agency that various forms of rationing would be employed in order to deal with shortages of staple foods. She blamed the hardening of the U.S. trade embargo by the Trump administration.

That’s likely one factor, but many observers give equal or greater blame to a plunge in aid from Venezuela, where the collapse of the state-run oil company has led to a nearly two-thirds cut in shipments of subsidized fuel that Cuba used for power and to earn hard currency on the open market.

It’s a similar though less intense situation to that of the 1990s, when the collapse of the Soviet Union turned the tap off on cheap fuel to the island, which led to an extremely difficult decade that became known as the ‘Special Period.’

“We’re calling for calm,” Diaz said, adding that Cubans should feel reassured that at least cooking oil would be in ample supply. "It’s not a product that will be absent from the market in any way."

Air Canada Vacations Managing Director, Nino Montagnese, was reached for comment on the weekend and indicated the resorts have not experienced any shortages to date “After checking with our product team, all seems fine in destination.”

Cuba imports roughly two thirds of its food at an annual cost of more than US$2 billion and brief shortages of individual products have been common for years.

In recent months, the Associated Press reports, a growing number of products have started to go missing for days or weeks at a time, and long lines have sprung up within minutes of the appearance of scarce products like chicken or flour.

Many shoppers find themselves still standing in line when the products run out, a problem the government has been blaming on “hoarders.”

Manuel Ordonez, 43, who identified himself as a Cuban small business owner, said the new measures would do nothing to resolve the nation’s fundamental economic problems.

“What the country needs to do is produce. Sufficient merchandise is what will lead to shorter lines,” he said.

Food stores in Cuba are government-run and sell products ranging from highly subsidized to wildly overpriced by global standards. Every Cuban receives a ration book that allows them to buy small quantities of basic goods like rice, beans, eggs and sugar each month for payment equivalent to a few U.S. cents.

Cuba maintains a total monopoly on wholesale commerce, imports and exports, with virtually no access for the country’s small but growing private sector.