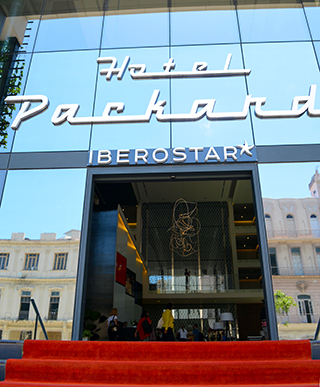 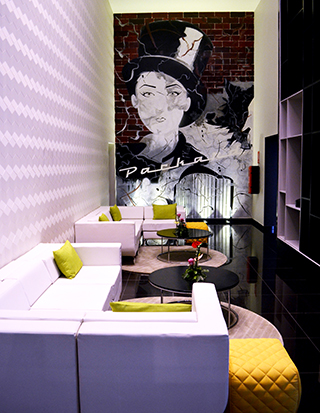 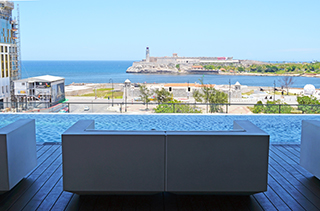 Rooftop views of the Morro Fortress from the sixth floor terrace and pool. 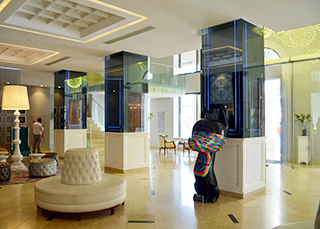 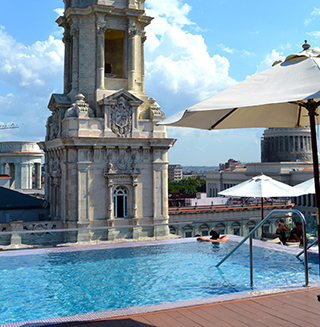 Rooftop pool offers up spectacular views from the sixth floor of the Gran Manzana. 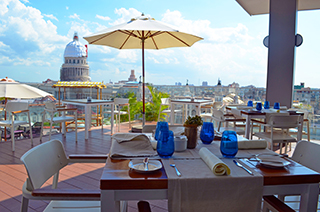 Lunch with a view!

“Cuba is open to the world, and the world is open to Cuba,” proclaimed Cuba’s Minister of Tourism at the closing of FITCuba 2019, the week-long trade fair held this year in Havana.

The statement underlined Cuba’s dedication to tourism, but Minister Manuel Marrero also showed an understanding that the demands of travellers are changing. He made a pledge that Cuba, which built its tourism industry on cheap and cheerful beach resorts, is adapting to those changes.

“We are living in different times, so in order to ensure the meeting of our commitments for this year, we must make choices. We have to do things differently,” he said. “We must continue promoting alternatives to improve or expand our hotel occupancy and improve our quality. For that reason, we must expand options and provide more offers to cruise tourists, give more services to clients, promote communications and make better use of ICTs (information and communication technology).”

Many “Firsts” For Cuba’s New Properties

Upwards of 4,000 new rooms and 30 new properties are in the pipeline through to 2021, part of a $3 billion pot being spent on new hotel facilities, according to the Minister.

In the capital city, 13 new hotels are set to open throughout the course of this year, like the Prado y Malecón by Paris-based AccorHotels, currently under construction in a prime location along the Malecon esplanade.

Some other notable planned properties across the island include:

Besides ramping up the hotel offering, Cuba is expanding the accommodation landscape with less traditional options, straying from the typical resort.

According to Marrero, there are 54 campgrounds in development, and through to 2020, 26 new projects for small and medium sized hotels. In private home rentals, 26,000 rooms are set to open all across the country. Marrero said the government is providing assistance and training to those who work in house rentals or who want to rent their homes.

The luxury market in Cuba is expanding, tapping into an entirely new market for the Caribbean destination.

The revolution was kicked off by the Gran Hotel Manzana Kempinski La Habana which opened in June 2017 as the city’s first ‘5-star-plus’ accommodation -- and first-ever Kempinski property in Cuba -- in a high-ceiling colonial style building that used to be a shopping mall.

“We always try to impress our guests and provide unique experiences,” Claudia Fernandez, spokesperson for Gran Hotel Manzana, told Open Jaw. “We try to keep the culture and ambiance of our city, but we mix it with European style.”

The hotel is exquisitely located, just steps from the Paseo del Prado promenade. The views from the hotels’ sixth floor rooftop terrace and pool are spectacular, day or night, whether it’s an illuminated Gran Teatro de La Habana at dusk, the 24-hour majesty of the Capitolio, or the whir of colourful vintage taxis during the day.

The Cayo Guillermo Resort Kempinski will be the island’s first non-all-inclusive resort, and is expected to open late this year, says Fernandez.

“It’s a very special place to have a property. The city destination of Havana and then the beach resort will be a combined experience for our guests,” she added. “Pilar Beach is one of the best beaches in Cuba and very popular because Hemingway used to go there with his yacht and he used to write about the place.”

Havana’s newest 5-star hotel is the Iberostar Grand Packard, which opened in September 2018.

The 321-room property adds a flavour of modernity to Havana’s old-time streets, but don’t be put off by the building’s strikingly contemporary look. As Gaviota’s Frank Oltuski said, the Packard “combines Cuba’s heritage with modern amenities.”

From the cuisine to the reconstructed facade, there is plenty of room for Cuban flavours on the property that tie in a local flair.

Five restaurants and three bars give guests a chance to savour both the local and the international. The luxury a la carte restaurant Biscuit, for example, features the intense flavours of Creole cuisine, explains Rene Bravo, Assistant Manager, while Tradiciones focuses on traditional Cuban dishes.

“Tradiciones promotes traditional Cuban cuisine at a gourmet level,” says Bravo. “And not just of Havana, but the entire island.”

The Packard overlooks the sea and the El Morro fortress, spectacularly viewed from its L-shaped rooftop terrace and pool on the sixth floor.

Off To A Good Start

Despite the U.S. recently announcing it would toughen restrictions on Cuba travel, the island welcomed 1.9 million visitors in the first four months of 2019, Marrero announced – that’s a 7% increase over 2018.

Last year, the island received a record 4.7 million foreign visitors, a 1% increase over the previous year, even in the face of the devastating effects left by Hurricanes Irma and Maria in fall 2017.

Canada is Cuba’s top source market by a large margin, accounting for 23% of total arrivals– or 1.1 million visitors -- in 2018.

Europe accounts for 20% of total tourist arrivals, with Germany, France, the U.K, Italy and Spain the most significant European markets. Marrero noted, however, that the European market dipped by more than 10% last year.

The U.S. market, whose citizens can only travel to Cuba through 12 authorized licenses, was growing at a rate of 174% before the hurricanes hit. That pace dropped by more than 40% early last year, but has been recovering gradually and had already increased by 3% by the end of last year. Most U.S. visitors arrive on cruise ships.

“This business will definitely continue to grow,” said Marrero. “We will ratify our policy that this form of tourism will continue to be a supplement to our main tourist business, which is the hotel development.”