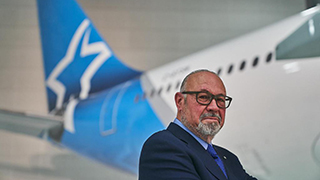 An explosive few weeks of news in the Canadian travel and aviation industry continues with the bombshell that Air Canada has signed an exclusive deal with Transat to merge the two companies.

The deal would see AC purchase all outstanding Transat A.T. Inc. shares at $13 per share, subject to confirmatory due diligence, regulatory and shareholder approvals and final documentation.

The proposed transaction is valued at approximately $520 million and Air Canada says it has all the necessary funding required to complete the transaction which is accordingly not subject to financing conditions.

"This announcement is good news for Transat," said Jean-Marc Eustache, President and CEO.

"This is an opportunity to team up with a great company that knows and understands our industry and has had undisputable success in the travel business. This represents the best prospect for not only maintaining, but growing over the long term the business and jobs that Transat has been developing in Quebec and elsewhere for more than 30 years."

AC says the deal would result in the combination of two respected Quebec-based aviation and travel brands to create a Montreal-based global leader in leisure, tourism and travel distribution.

"A combination with Transat represents a great opportunity for stakeholders of both companies.  This includes the shareholders of both Transat and Air Canada, employees of both companies, who will benefit from increased job security and growth prospects, and Canadian travellers, who will benefit from the merged company's enhanced ability to participate as a leader in the highly competitive leisure travel market globally,” said Calin Rovinescu, President and Chief Executive of Air Canada.

“The acquisition presents a unique opportunity to compete with the very best in the world when it comes to leisure travel. It will also allow us to further grow our hub at Montréal-Trudeau Airport, where we have added 35 new routes since 2012 to the benefit of the Montreal and Quebec communities, and from which we carried 10 million customers in 2018 alone."

With the finalization of definitive agreements, confirmatory due diligence, regulatory and shareholder approvals and other normal closing conditions, Air Canada says there is no assurance that the transaction will be completed. The pair have agreed to a 30-day period of exclusive negotiations during which AC will complete its due diligence review and the parties will finalize the negotiation of a definitive agreement.

Air Canada says no further announcements are expected to be made until the signature of the definitive agreements unless required by law.

Transat stresses in a statement that its operations continue in the normal course and there will be no change for its clients, suppliers and employees. “In particular, travellers and clients of Transat can continue to travel and book their vacation packages with Transat like before,” the company said in a statement.

Headquartered in Montreal since 1949, Air Canada maintains one of the largest global head offices in Quebec. Air Canada employs 36,000 employees globally, with close to 10,000 of those in the province of Quebec where it has created over 2,600 new jobs over the last five years. The airline served more than 10 million passengers in Montreal in 2018.