Cuba 2.0 – How The Destination Hopes To Appease The Digital Traveller 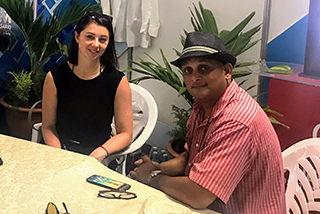 Open Jaw's Anna Kroupina (left) and Pavel Pavon Vargas, Director of IT and Communications with Cuba's Ministry of Tourism.

The first step to overcoming your weaknesses is admitting you have them.

Judging by the words of Cuba's Minister of Tourism, the destination recognizes where it needs to improve to become more attractive and accessible to tourists, and is taking strides to achieve those changes.

At the country's recent FITCuba trade fair from 6-10MAY, Minister of Tourism Manuel Marrero Cruz highlighted the country's assets, from its award-winning beaches to its nine UNESCO world heritage sites, 277 national monuments, 14 national parks and broad cultural and historical legacy.

But in recognizing the country's virtues, the minister also drew attention to Cuba's insufficiencies.

"There’s always room for improvement," he said. "Even if we know that tour operators and customers recognize our improved quality, we are aware of the fact that we need to continue to work in this area to improve our quality to price ratio, the supplier services, the diversity of food, the comfort in our rooms, the diversity of products in our shops and the stability of service in car rentals."

Among these deficiencies, Marrero highlighted Cuba's poor internet connectivity as a common tourist complaint. According to the minister, 66% of Cuba's hotels already have internet connectivity and wi-fi access in either the common areas or surfing rooms, but the island is looking improve and increase that service.

Catering To The 2.0 Traveller

As Pavel Pavon Vargas, Director of IT and Communications with Cuba's Ministry of Tourism, told Open Jaw, connectivity and access are areas into which Cuba is putting considerable resources and expertise.

"We have seen the emergence of a new market -- the internet market -- and a new type of tourist -- the 2.0 traveller who uses technology before and after visiting a destination. The main objective of the transformation of Cuba destination is to provide services to this digital traveller throughout their trip and using all tools to meet these needs," Pavon said.

Cuba has long faced barriers in its IT development, in large part because of the American blockade, he said.

"The principal providers are from the United States, so we have to find access from other providers, for example China, which is very far away. This is the main problem," he said. "Another problem is the internet accessibility wireline. Thanks to the collaboration with Venezuela, we have now laid down underwater cables that facilitate access to the internet."

The cables that Pavon is referring to are a project that started in 2011 to connect Cuba and Venezuela via underwater fibre optics cables, a move that would improve Cuba’s internet capacity, and generate less expensive internet access.

According to Pavon, the project was completed approximately five years ago.

Otherwise, Internet access on the island remains dependent on a satellite connection, which Pavon says is too costly to use for widespread connectivity.

Hooked Up By Year-End

The country's current strategy is for all resorts to have wi-fi accessibility in the hotel lobby by the end of 2019, says Pavon. Additionally, all four and five-star hotels and resorts will have connectivity in individual guestrooms and beach areas.

Cayo Santa Maria was first to become a "smart destination," as Pavon puts it -- all hotels on the island have received the IT infrastructure needed to connect them to wi-fi. Next in line is Cayo Largo del Sur.

In his speech at FITCuba, Marrero also mentioned that Cuba is in the "early steps" of ensuring Internet access in airports for free, as well as onboard tour buses.