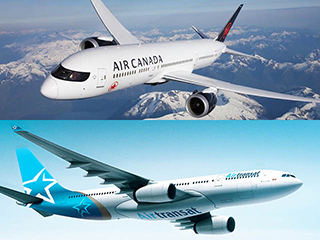 Quebec newspaper La Presse revealed yesterday that the largest shareholder of Transat and of Air Canada opposes the preliminary proposal for the purchase of the Montreal tour operator by the airline.

Brosseau & Assoc., the Quebec-based asset management firm run by Peter Letko and Daniel Brosseau, owns 20% of Transat and 10% of Air Canada – and it’s the largest shareholder of both. The La Presse report says the company is not in favour of the transaction.

According to them, the offered price at $13 per share is lower than the real value of Transat and they would be surprised "that a serious and intelligent shareholder can say yes to the evoked price."

Quebec’s Minister of Economy, Pierre Fitzgibbon, weighed in on the issue, saying that the provincial government has had "several discussions" with investors who offer a "100% Quebec" solution to the sale of Air Transat,

"While [negotiations continue] between Air Canada and [Air Transat], [...] other groups [are interested in the situation]. We are ready to help any business that has a 100% Quebec solution for Air Transat. We have had several discussions, some are not very advanced, some more advanced, but there is a significant interest that is raised," said Fitzgibbon as quoted by La Presse.

Transat is halfway through a 30-day trading exclusivity period to be sold to Air Canada, but any final agreement must be submitted to significant shareholders.

"It's a transaction between two private companies. There are shareholders who will have to decide whether they accept or not. What interests me is that the head office stays in Quebec and that we keep the maximum number of jobs, "commented Premier François Legault on Thursday.