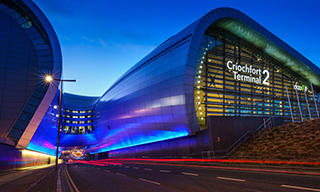 WestJet has launched non-stop service between Calgary and Dublin aboard its new 787 Dreamliner aircraft.

"With the launch of our third transatlantic Dreamliner flight, WestJet adds to our exceptional growth into and out of Calgary, where we remain the airline with the most destinations and departures," said Arved von zur Muehlen, WestJet Chief Commercial Officer. "With more than 4.5 million Canadians claiming Irish heritage,” we are pleased to be providing Canadians with easy access between Western Canada and Ireland."

Jason Kenney, Premier of Alberta, called the inaugural Calgary-Dublin flight "a declaration of confidence in the economic future of our province, and more proof that we are open for business and ready to take on the world."

Until 5OCT, the flight will operate three times per week and between 6OCT to 19OCT, flights will be bi-weekly.

This newest Calgary-Dublin Dreamliner route adds to its existing 787-9 flights between Calgary and Paris and London (Gatwick), and complements its existing seasonal Halifax-Dublin route.

By June 2019, WestJet will offer flights to 67 non-stop destinations with an average of 975 flights per week from Calgary.