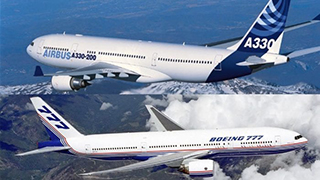 The revival of competition between Boeing and Airbus is expected to result in record delivery of the highly popular narrow-body platforms and a 9.4% year-on-year growth in production.

The data comes from Frost & Sullivan's recent publication 2019 Global Commercial Aerospace Outlook, which analyzes the current market landscape of the commercial aerospace industry at a global level. It covers the regions of Asia-Pacific, Europe, North America, Middle East and Africa, and Latin America.

The analysis suggests that Boeing will receive a boost once it finalizes its deal for Embraer's airliner business in 2019 to counter Airbus's acquisition of Bombardier's C Series program; it will continue to develop its new mid-market aircraft (NMA) platform and position itself for growth in next-generation markets.

"Top aerospace companies as well as entrants are investing in R&D centered on electrical propulsion, generation, distribution, storage, and conversion."

"Asia-Pacific will experience the highest growth in terms of aircraft deliveries and will sustain this position in the future. However, North America and Europe will continue to be the largest suppliers of aircraft," noted Kuder.

"In terms of technologies, advanced composite materials, additive manufacturing, and electrification will disrupt the design and construction of platforms, while digitalization of aviation has already evolved into a $1.5 billion business."