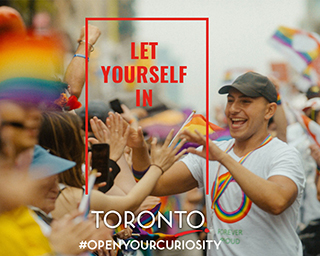 Tourism Toronto has released a new destination marketing campaign
- "Let Yourself In".

Hoping to capture the city's sense of welcome and diversity, Tourism Toronto has launched a new destination marketing campaign, "Let Yourself In."

The campaign launches on the heels of another record year in visitation, having welcomed 44 million travellers in 2018, as well as the recent Toronto Raptors NBA win.

"Right now, Toronto's having a real moment – you can feel the incredible sense pride and energy here. Now, with the world watching, we're inviting travellers to be a part of that pride and energy," said Jon Mamela, Executive Vice President and Chief Marketing Officer at Tourism Toronto. "Toronto is the front door to Canada, and our message to travellers is simple – Let Yourself In – be a part the excitement, diversity and unapologetic progressiveness that defines who we are."

Serving as the platform for Toronto's sales and marketing programs over the next two years, Let Yourself In launches this week in select markets in the U.S. and Canada with an integrated strategy using video and digital tools to target potential travellers. The campaign also includes partnerships with select publishers and influencers featuring the #openyourcuriosity hashtag.

Toronto's meeting, conferences and events industry will also leverage Let Yourself In in global sales efforts. Business events in Toronto have seen tremendous success in 2019. In fact, last year the city hosted more international MICE delegates than any other city in North America.

Videos from the Let Yourself In campaign can be viewed on Tourism Toronto's website.