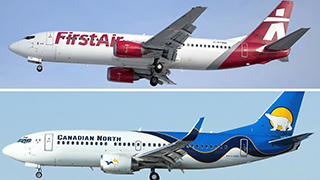 A merger between First Air and Canadian North has been approved by the Government of Canada.

The two Indigenous-owned primary air carriers serving Canada's North filed a merger notification with the Commissioner of Competition and the Minister of Transport in fall 2018.

The approval of the merger comes following a public interest assessment led by Marc Garneau, the Minister of Transport, and incorporated the findings of the Commissioner of Competition.

"The North, more than any other region in Canada, relies on air transportation to maintain quality of life. We carefully examined the public interest, financial and competition aspects of the proposed merger," said Garneau in a statement. "A strong, financially stable northern air carrier, taking advantage of operating and network efficiencies of a merger, will best serve the North by leading to greater reliability of service as well as environmental sustainability."

The merger is subject to a number of terms and conditions.

"The strict terms and conditions will keep costs low and ensure northern and remote communities have the access they deserve, while at the same time protecting northern jobs," said Garneau.

Earlier this year, The Globe and Mail reported that the Competition Bureau ruled that a merger between First Air and Canadian North would result in a “merger-to-monopoly” and said it would likely lead to higher prices and fewer flights.

First Air and Canadian North owners reacted angrily, saying the bureau ignored the “overwhelming” benefits for northerners, floated the risk of the airlines “being driven out of business” and argued a merged northern airline is the “only long-term viable answer.”