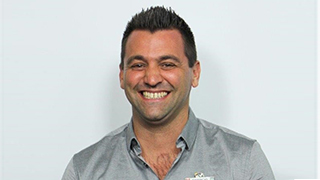 As GM – or "Chief of Village", as the resort refers to the position -- Lacoste will be responsible for all aspects of resort operations at the new Club Med in Quebec's Charlevoix region, which is expected to open on 5DEC, 2020.

"We are pleased to welcome Francis as the first Chief of Village of our highly anticipated future Club Med Québec Charlevoix," says Carolyne Doyon, Senior Vice President, Club Med Canada and Mexico. "Appointing a first Chief of Village from Quebec will allow us to maintain Quebec’s involvement once the resort opens. His kindness, knowledge and professionalism will strengthen Quebec’s reputation for hospitality beyond its borders."

Lacoste began his career with Club Med 10 years ago as a Gracious Organiser at Club Med Sahoro Hokkaido in Japan, where he taught alpine skiing. As a Quebecois sports enthusiast, he then took on the role of Head of Land Sports before moving on to the position of Head of Sports and Events.

He then lead resorts across the world as Chief of Village, first in Turkoise in Turks and Caicos, then in Val Thorens in the French Alps, and lastly at Club Med Djerba la Douce in Tunisia.

"What an honour for me, as a Canadian, to return to my roots and inaugurate the opening of the first Club Med resort in Canada: Québec Charlevoix," says Francis Lacoste, Chief of Village, Club Med Quebec Charlevoix. "As a Canadian, born in Montreal and raised in the borough of Saint-Laurent, I fully recognize the richness of this beautiful region. A new chapter is being written for all of us: Club Med Québec Charlevoix, you will be unique and will reflect the values, personality and warmth of the Canadian people."