Airbus Calls First Year Of A220 Partnership “A Great Success” 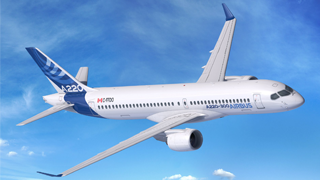 Airbus Canada Limited Partnership marked its first anniversary on 1JUL, one year exactly after Airbus became the majority partner in the A220 aircraft program, formerly the Bombardier CSeries program. In 2019, Airbus is also celebrating the 35th anniversary of its presence in Canada.

Highlights of the first anniversary include orders and commitments signed for more than 230 A220 aircraft, the ground-breaking for a new A220 manufacturing facility in Mobile, Alabama, and expansion at the Mirabel manufacturing facility. Airbus Canada has delivered more aircraft in its first year than the total delivered up to 1JUL, 2018, when it took the lead of the program.

In total, the A220 ends the first year of Airbus leading the program with a healthy firm order book of over 500 aircraft, plus 80 additional commitments announced at this year's Paris Air Show including from leading international lessors, indicating strong demand for the aircraft in markets worldwide.

"This has been a year of growth and accomplishment for the A220," said Philippe Balducchi, CEO of Airbus Canada Limited Partnership and Country Head, Airbus Canada.

"This truly innovative Quebec-born aircraft is making its mark on the aviation industry around the world. It is thanks to the strong collaboration with our customers, partners, suppliers and all our employees that we have made great strides to ensuring the success of the A220 for many years to come."

Mike Lane - July 5, 2019 @ 16:21
It was with great pride I saw an AIR BALTIC A220 at VCE airport yesterday.
It certainly looked great. Feel even better knowing sales are way up.