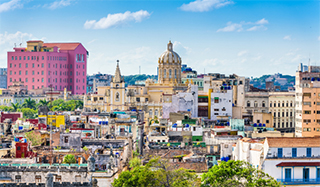 As Cuba's capital celebrates its 500th anniversary this year, Sunwing is bringing back direct flights from Montreal to Havana for the first time since 2012. The twice-weekly service will operate on Mondays and Fridays from 13DEC, 2019 until 13MAR, 2020.

"We are excited to once again be offering Montreal residents the popular direct flight service to Havana. As the world’s largest vacation provider to Cuba we’re thrilled to be offering even more vacation options in this varied destination that has a perennial appeal for our customers in Quebec," said Sam Char, EVP for Sunwing Travel Group in Quebec.

President and CEO of Aéroports de Montréal, Philippe Rainville, commented that the historic city of Havana is "especially popular with Quebecers."

Havana has a rich history and fascinating heritage to uncover. Visitors will feel like they’ve travelled back in time as they stroll along the cobblestone streets of Old Havana, lined with picturesque Baroque architecture and classic American cars. Travellers can even follow in the footsteps of famous author Ernest Hemingway, who called the city home for over 20 years, by discovering some of his favourite old haunts on a Sunwing Experiences excursion.