Big Fleet Changes At AF-KL Include Order For 60 A220s 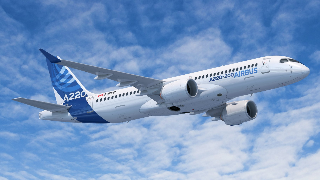 The A220s – formerly Bombardier’s CSeries aircraft, now built by Airbus -- will gradually replace Air France's A318 and A319 fleet. The airline says it is studying the replacement of the A380s by new-generation planes.

Air France-KLM says these decisions reflect the group's focus on simplification and desire for a more competitive fleet with a significantly reduced environmental footprint. It calls the moves “key to achieving leading industry margins.”

"These decisions support the Air France-KLM Group's fleet competitiveness strategy," said CEO Benjamin Smith. "They follow the recent orders for A350s and Boeing 787s that Air France and KLM have placed. We are very pleased to work with Airbus to add the A220-300 to our fleet, an aircraft that demonstrates optimum environmental, operational, and economic efficiency.”

The first A220-300 is scheduled to be delivered in SEPT 2021. With a capacity of 150 seats and an operating range of 2,300 nautical miles, the aircraft is well-suited to replace the A318 and A319 on the Air France short- and medium-haul network. It also generates 20% less CO2 emissions than comparable aircraft in its class, and is twice as quiet.

In terms of profitability, AF-KL says the A220 will reduce its cost per seat by more than 10% compared to the aircraft it will replace.

As for the A380, AF-KL says “the current competitive environment limits the markets in which the A380 can profitably operate.” It says keeping the aircraft in the fleet would involve significant costs. As well, Airbus suspended its Airbus program earlier this year, so there’s little future for what was the world’s largest passenger jet.