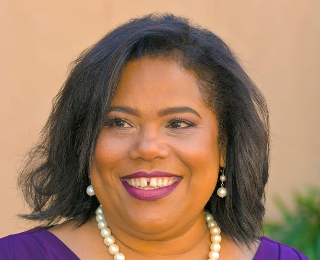 She may be new to the Saint Lucia Tourism Authority (SLTA), joining as the board's CEO just a few weeks ago, but Beverly Nicholson-Doty is no stranger to the travel and tourism industry.

Open Jaw got a chance to meet and chat with the new boss at the 7th annual Saint Lucia North American Showcase, held at the Royalton St. Lucia on 24JUL.

Nicholson-Doty has more than 30 years of experience working in the hotel and tourism industry, split between the private and government sectors.

"I started my career working in hotels, so tourism is my life," says the USVI native.

For 14 years, Nicholson-Doty was CEO of the USVI Hotel & Tourism Association, a private sector trade organization. For the past 12 years, she held various roles at the USVI Department of Tourism, most recently as Commissioner.

Now, as CEO of the SLTA, she has moved to Saint Lucia and is ready to plant roots and promote the island's wonders to the world.

"Saint Lucia is now my home and I'm so excited about being here," she says. "I served as the Chairman of the Caribbean Tourism Organization for two years and I travelled to 23 of the 31 member nations during that tenure. I can categorically say that I have never met such incredibly wonderful people [as I have in Saint Lucia]. It's certainly there when we enter into the tourism zone -- that's the expectation -- but it has been across the board here."

As CEO, Nicholson-Doty is responsible for the overall management of the SLTA. In her opening address at the showcase, she promised to increase partnerships, bolster social media presence, and build the Saint Lucia brand awareness.

And with experience in both the public and private sector, creating a synergy between the two is a priority.

"It allows for us to leverage opportunities. When you have government and the private sector working together, it really allows the destination to put forth the very best of what we have to offer," she says. "We are looking at each of our markets and seeing how we can streamline, how we can make it most effective, how we can raise consumer awareness and how we can tie into our trade partners."

When it comes to the Canadian market, Nicholson-Doty has her work cut out for her. The island saw a 6% drop in Canadian arrivals last year, and according to Saint Lucia's Minister of Tourism Dominic Fedee, the trend seems to be continuing this year.

"Canada has been one of the pillars of business for Saint Lucia," she says. "We have seen some slippage in numbers and we know that that's closely pegged with the value, the currency. We are mindful of that and we want to make sure that we're showing all of the categories of product that’s available."

Nicholson-Doty says developing niche markets like wellness and diving can further help bolster arrivals, and Saint Lucia's natural assets make the destination conducive to offering the natural, authentic experience that travellers the world-over are looking for.

"One of the unique things is that you can have your traditional sun, sand and sea, but you can have so much more, from the rainforest to the volcano, to going to Soufriere and the sulphur baths," she says. "The diversity of the product is so meaningful because what we are really looking at is not just tourists -- tourists come to a destination and they do tourist things that are often manicured, or set. Saint Lucia provides this incredible opportunity for travellers that is a much more sophisticated experience for the individual that wants to have a deeper dive into a destination."

For Nicholson-Doty, it's not just about boosting arrivals. While that's important, visitor spend is equally valuable in the bigger picture.

"It's really important that we have visitors that are not just spending within the properties where they're staying. We want them to get out the doors and really see Saint Lucia. Tourism works best when it works across the board and you have the most participation," she says.

As it happens, Canadians are notoriously known for not being big spenders – and that's a trend that Nicholson-Doty says holds true for those visiting Saint Lucia -- but it doesn't leave her discouraged.

"People will spend based on their passion, so it's about identifying those areas where they're willing to spend more or spend differently. It's just about finding that sweet spot. There's an opportunity for us to look at specific niche markets," she says.

Nicholson-Doty wants travel to Saint Lucia to be all about the experience, whether it's checking out local arts and crafts, getting greasy fingers eating roti on the side of the road, or trying fig salad for the first time -- which incidentally doesn't contain figs.

"At the end of the day, we don't want people to leave here saying, 'I just went to another Caribbean island,'" says Nicholson-Doty. "We want them to say that they've been to Saint Lucia and that it's an experience to take with you and that's the memories that will hopefully translate to them coming back again and again."