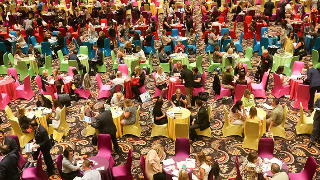 From 10-16AUG, thousands of Virtuoso’s travel advisors have come together to seek out the latest offerings in luxury experiences by meeting with the network’s preferred partners.

With 7% growth in attendance, a record-breaking 6,515 travel professionals from 107 countries will spend a week at Bellagio Resort & Casino, ARIA Resort & Casino and Vdara Hotel & Spa in Las Vegas, where they will conduct almost 280,000 one-to-one appointments.

Building better human connections between Virtuoso’s travel agency members and preferred partners is the cornerstone of the event, with the goal of creating more tailored travel experiences for clients at its core.

When Virtuoso Chairman and CEO Matthew D. Upchurch took the stage during the event’s opening ceremony yesterday, his message focused on showing humanity in a world overrun by technology.

His address followed keynote speaker Chip Conley, founder and former CEO of Joie de Vivre Hospitality, Airbnb’s Strategic Advisor for Hospitality + Leadership and founder of the Modern Elder Academy, who talked of Virtuoso’s legendary reputation of being high-touch, but he called the power of the network “high-team.”

In Conley’s estimation, it makes sense that travel advisors have become “Life Experience Guides,” as people’s biggest regret is not having enough meaningful time to create once-in-a-lifetime memories with the people they love most.

Virtuoso clients also listed their advisor as their most influential source of making travel decisions – beating out friends and family for the first time. He noted trust is why referrals are still the number one source of business for advisors.

Upchurch added that the “high-team” concept not only connects the network’s travel agency members and partners, it also creates a through-line to customers who value travel differently. “High-team” places the emphasis on being more human, which is profitable and hard to replicate, and for the group’s preferred partners, it plays a significant role in fighting the commoditization of products.

Speaking of the ubiquitous nature of technology, Upchurch remarked, “If dehumanization is growing at an exponential rate, we better be exponentially more human. Human-centric business – doing business based in trust – is an innovation in this time.”

Speaking about Virtuoso’s powerfully diverse global network, Upchurch also noted it has added 14 travel agency members in Greater China over the last year, bringing the total to 23. He says the common theme amongst travellers from all regions is the craving for authentic service that offers them hyper-personalized attention. Delivering that service comes from a myriad of ways, including drawing upon the strength that comes from the cross-collaboration of 20,000 travel advisors in more than 50 countries.